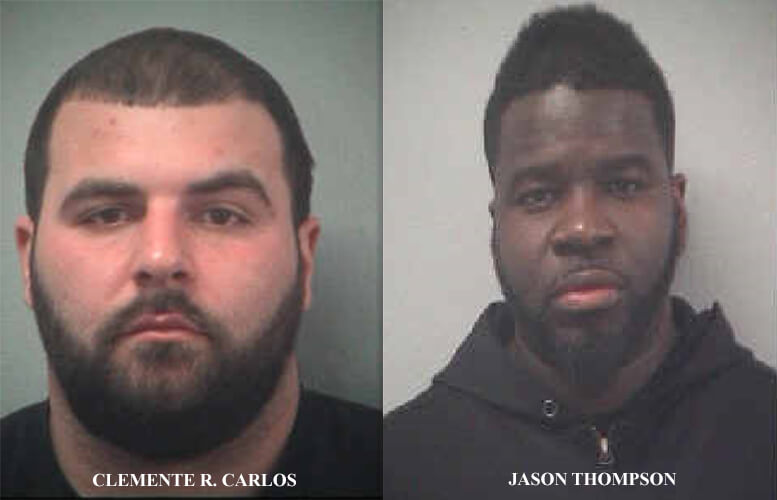 Two men have been arrested on a bevy of charges for impersonating sheriff’s officers during a summer home invasion on 20th Avenue, according to Passaic County Sheriff Richard Berdnik.

Jason Thompson, 32, of Paterson and Clemente R. Carlos, 28, of Newark were identified using surveillance footage and arrested in the past seven days, Berdnik said.

“These two suspects were charged with 19 serious crimes, ranging from robbery to impersonating a law enforcement officer. I am thrilled that they have been apprehended and now are behind bars,” Berdnik said.

Surveillance footage shows Thompson wearing a sheriff’s shirt with a handgun on his waist.

Thompson was clad in a sheriff’s shirt and Carlos hung a five point star badge on his neck allegedly impersonating law enforcement officers while conducting a home invasion in the second floor apartment of a 20th Avenue home on August 12, 2015, authorities said.

The two men entered the second floor apartment and restrained a resident of the apartment using a white zip tie, authorities said.

Authorities reviewed surveillance footage and identified the suspects were not law enforcement officers. The surveillance footage captured a vehicle that was used in the alleged home invasion which allowed the FBI and the sheriff’s office to arrest Thompson and Carlos outside their homes.

Carlos was arrested while exiting his Seabury Street home in Newark on Monday, December 7, 2015 and Thompson was also arrested exiting his East 25th Street residence in Paterson on Wednesday, December 2, 2015, authorities said.

Authorities said a .38 caliber handgun stolen out of North Carolina was recovered from Thompson’s home. Ammunition and a face mask were also recovered from the home, Berdnik said.

Carlos was arrested in connection with a Belleville shooting in April 2014, according to media reports.

The charges are all first and second degree in severity, authorities said.

“These individuals’ actions go against the very fiber of our society by impersonating members of law enforcement,” Berdnik said. “The public needs to have a trust that person portraying to be law enforcement will help protect them from harm, not actually cause harm.”