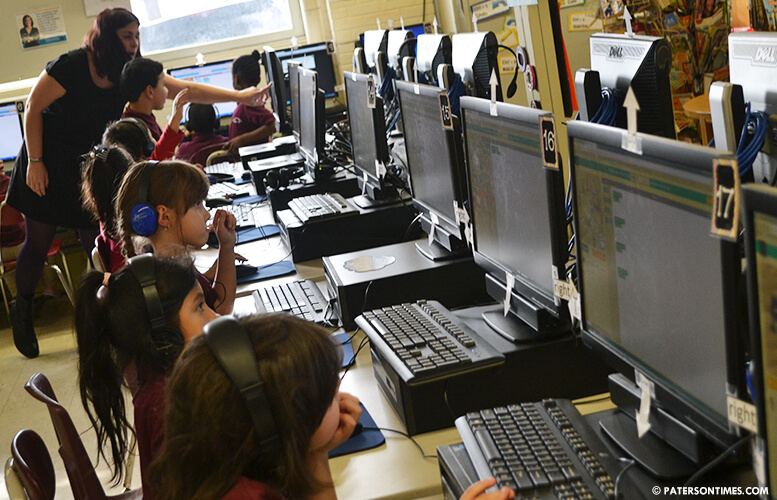 Six-year-old Sebastian Pichardo, commanding a small robot using color codes at the School 27 media room on Thursday, joined millions of school children across the globe to tackle the one-hour of code challenge which exposes young people to computer science.

Pichardo’s tiny robotic vehicle called the “Ozobot” is controlled through several colors which determine the manner in which it travels from its starting point to its destination. The color detecting capability of the vehicle allows the bot to do certain maneuvers when it comes across a color combination on the thick black line which represents the tracks or road.

The first grader was able to use the colors to dictate whether the vehicle moves fast, slow, jumps, cruises, or spins. He also had to ensure his vehicle did not fall into a river that meanders around the thick black line that denotes a road.

Pichardo said he enjoys Ms. Yar’s class. “We get to play with robots,” he said.

Although he may not realize it, he is incorporating concepts from mathematics, science, geography, and pattern recognition, said School 27 technology teacher Megan Yar.

As Pichrdo worked on his driverless vehicle, guiding it with colors, and preventing it from nose diving into the river, other students nearby at the computers worked on coding their own “Star Wars” video game.

The students used a graphical user interface or GUI on Code.org to drag various commands on a split framed webpage to program their games. “They will be able to make their own game that they can share with their classmates,” said Yar.

1st grader Mohammed Khalil, 6, showed how he was able to drag and drop commands on the work-space side of the screen and then hit run. The run button executed the new pieces of code which moved characters like R2-D2 in a series of actions defined by the students.

Khalil was also able to change the character’s environment. He dragged a command that added large rocks on the landscape and then undid the same code to make it disappear. The 1st grader said he intends to share the game he created with his friends.

“A lot of the careers in the future for them will be computer programming,” said Yar, who began the class by asking the 22 students to define algorithm.

“What is the definition of an algorithm?” she asked.

“A list of steps,” responded the students in unison.

The principal was amazed to see all the swift 1st graders coding video games on the computer. “It’s amazing really the skills they are being taught at such an early age,” he said.

Yar has made it easy for the students to pick up desktop computer at an early age. She said many came to her class with the basics powering a computer, using keyboard, and mouse.

The teacher even added a ring on top of the mice to accommodate the children’s small hands — the mice were too large for the 1st graders’ small hands.

“I did not have an opportunity to study this at elementary school,” said Yar.

The principal said the school is working on putting together an after school club for students interested in computer and programming.

Hour of Code is a global movement spearheaded by non-profit Code.org to encourage students to learn computer science. It reaches “tens of millions of students in 180+ countries,” according to the organization.

Though Khalil and Pichardo enjoyed the hour of code neither expressed a strong interest in computer science.

“I want to be a police officer and a scientist,” said Khalil. Asked whether a computer scientist, he said scientists who mix “things,” a chemist.

Pichardo wants to become a teacher – a computer teacher like Ms. Yar, he said. Whatever they chose to become in life they will have certain skills that will help them excel.

“This is problem solving,” said Yar. “This is critical thinking.”