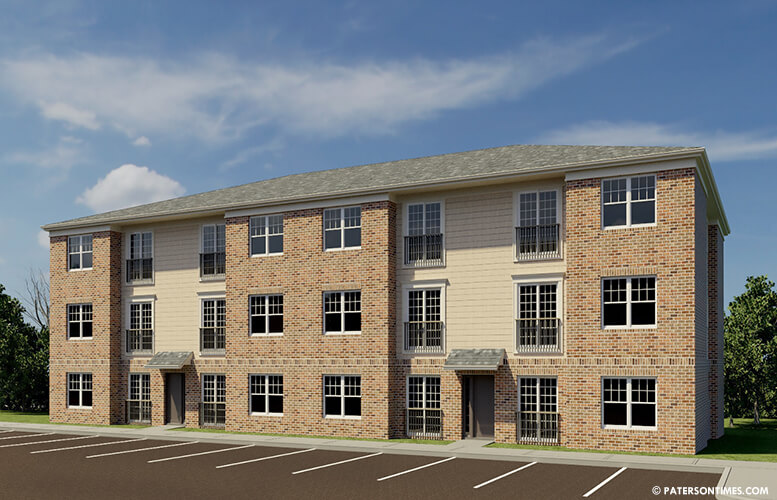 “The construction of affordable and market-rate homes is ideal, not just because it’s a significant part of our Great Falls Historical District, but because it spurs movement and a greater economic climate for the neighborhood and the city,” Mayor Jose “Joey” Torres said at the Thursday morning groundbreaking ceremony.

The developer estimates the project will cost $25 million. “This is the kind of project Greentree specializes in,” Dave Gunia, division president at Greentree Development Group, said. “We’ve looked closely at this space and the plans for Paterson’s future, and we believe this community will be one that will make Paterson proud.”

Gunia’s massive gated community apartments sits on a crest at the very beginning of Jasper Street not far from Totowa Avenue and Liberty Street.

The 8.65 acre site will include amenities such as tot lots, basketball courts, a fitness center, and much more, according to the developer.

Torres said the site was sought after by many developers, but Greentree Development Group had the best plan for the space.

The mayor tried a similar project with a different developer in the same area in 2008 that ended badly. His successor Mayor Jeffery Jones attributed the failure of the project to poor planning. Torres was filmed in a video jumping on top of a bed when the ill-fated apartments units hit the market celebrating its opening.

The abandoned project became home to vandals and vagrants and was torn down in middle of 2013. Jones wanted to build a cocoon shaped hotel at the site, but that plan never truly materialized.

Gunia said this time the economy is different and was confident the vista project will be a success. He cited the location near the national park that is slowly coming into being and a panoramic view of the Manhattan skyline.

There’s also the historic Hinchliffe Stadium which is being rehabilitated and restored to host entertainment events and games.

“Greentree works closely with cities to help them realize their visions while providing beautiful places to live, work and play. We’re very excited to take such an important role in helping Paterson reimagine itself for the 21st Century,” Gunia said.

The project located at 1 Jasper Street is expected to open in the summer.