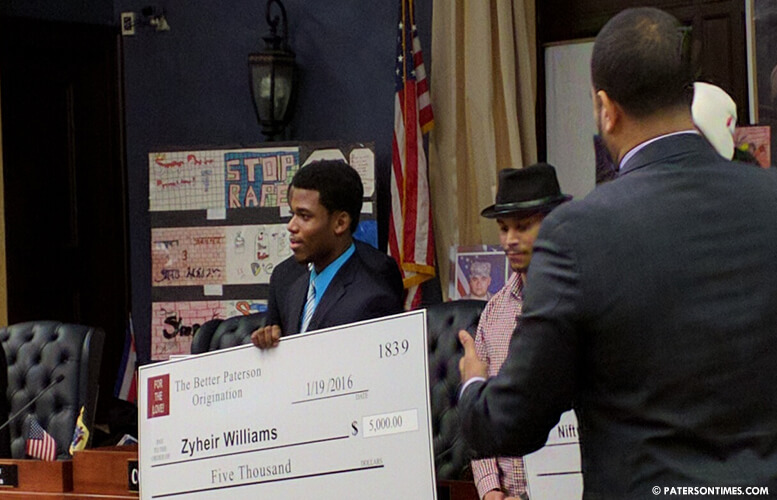 “This young man, who hails from my alma mater, is an incredible student,” praised Jackson as he handed a large check to the John F. Kennedy High School student. He mentioned the student’s grade-point-average of 3.96 and his volunteer work.

Williams has clocked more than 400 hours of community service, according to his resume, volunteering to tutor young students, assist with toy drives, and helping to maintain a community garden.

The high school senior has applied to the New Jersey Institute of Technology (NJIT) and has an interview with Columbia University, he said. He will be the first in his family to attend a four-year institution.

He has five siblings including himself. “Hopefully, I can be a role model to my siblings,” said Williams. He said three of his siblings are younger than him.

Williams’s resume impressed Jackson greatly after Choudhury sent it over to the councilman. Choudhury said Williams, who is a student at the John F. Kennedy High School’s science, technology, engineering, and mathematics (STEM) academy, is a member of the Robotics Club at the school.

Jackson said Williams was the only person considered for the scholarship which is funded by the councilman’s city salary. He made a campaign promise to distribute his council salary to community causes. He is distributing the funds through his presently forming nonprofit organization the Better Paterson Organization.

“We often hear negative stories about our young people when we have phenomenal students like this. Trust me there’s a lot of students like him in our city,” said Jackson.

Jackson also donated $250 to the Paterson Nifty Lions, a youth football team. He also donated a $250 check to Williams to take care of other expenses he may have, said the councilman.