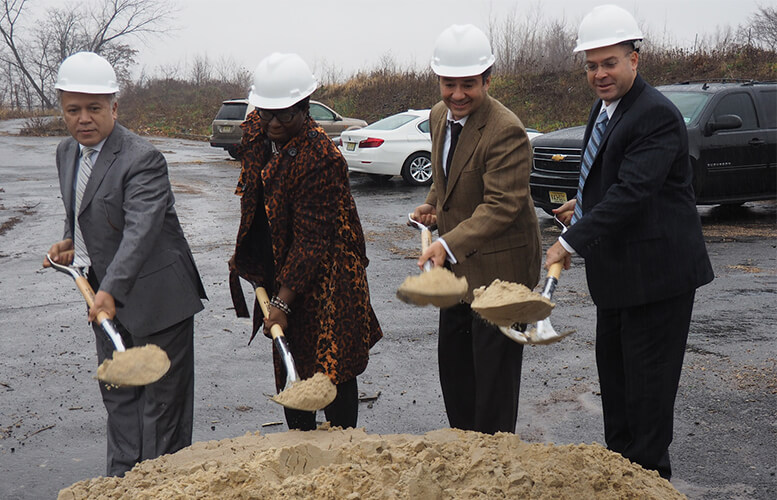 The city’s historic preservation commission on Monday evening reviewed a new design of the Paterson Vista housing development, which included changes to the outer appearance of the series of buildings to mimic the look of mills, but symbolically refused to take a vote on the controversial project.

The tabling of the resolution will not halt the $35 million controversial development project inside the Great Falls Historic District, said officials. However, they pointed out the developer Lakewood-based Green Tree Development needs to obtain approvals from: “The Passaic County Planning Board, Easement to the City of Paterson, Great Falls Historic Preservation Commission, Passaic County Sewerage Commission, H.E.P. Soil Conservation District, and the N.J. Department of Environmental Protection for a T.W.A. Permit,” according to the planning board resolution.

“How can this, 20 years from now, relate to Paterson?” asked commissioner William Tates to the project’s architect Matthew Evans.

Evans showed a new rendering of the building that gives the series of 13 buildings a more “industrial look” with dark brick exterior that mimic old mill buildings. He said the new design also uses different materials and include larger windows and the elimination of Juliet balconies.

“I think it’s going to add to the landscape,” said Evans in front of a room full of people opposed to the project because they say it threatens the Great Falls National Park. The National Park Service also agrees the development at the very beginning of Jasper Street off of Totowa Avenue will “degrade” the park.

Martin Feitlowitz, another commissioner, called the development “a disaster for the propery.”

Kenneth Simpson, chairman of the commission, asked about access to the scenic overlook. The developer agreed to hand over a piece of the land at the top of the cliff to the city to provide public access to the promontory on which a two-and-half story tower stood allowing visitors a sweeping look at the city.

The developer Dave Gunia’s concession to hand over the thin slice of land was met with skepticism.

David Soo, head of the Friends of the Great Falls, pleaded with Gunia to halt the project. “Sir, this is our community. We don’t have much in our community for our future. This may not be the right thing for our town,” he told the developer directly.

David Cubby, head of the forming Paterson Historic Preservation Society, said the city risks losing the partnerships it has built with the park service and other organizations.

A number of people spoke in opposition to the project at the McBride Avenue visitors center. “We feel the proposal is not appropriate to the site,” said Richard Polton of the Hamilton Partnership for Paterson.

Glenn Corbett, a local historian who wrote a book on the Great Paterson Fire of 1902, said the buildings have to be completely obscured from view for it to not negatively impact the Great Falls.

“This is wrong the way it is,” said Feitlowitz.

“It doesn’t quite speak to the historical value that I’d be proud of in 20 years,” added Michael Jackson, 1st Ward councilman, in whose ward the project is situated. “It’s a little disheartening.”