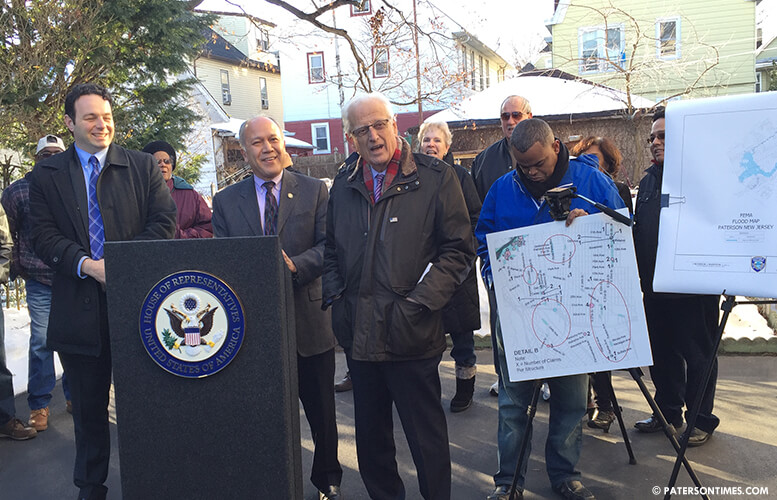 City residents paying thousands of dollars in flood insurance every year despite living far away from the Passaic River may soon see some relief as the federal government looks to revise local flood maps, announced Rep. Bill Pascrell, Jr. at a news conference joined by municipal officials on Wednesday afternoon.

Pascrell,  stood side by side with about a dozen residents and local officials to announce the progress made after continuous pressure on the Federal Emergency Management Agency (FEMA) to revise Passaic County’s flood map.

Because of outdated data from Office of Emergency Management, city residents are being forced to pay flood zone premiums up to $3,500 per year, according to Mayor Jose “Joey” Torres. East 30th Street, Buffalo and Trenton avenues were few of the streets unnecessarily paying flood insurance.

By revising flood zones, Pascrell expects to deliver relief to the home owners. “Flood maps affect insurance rates, they effect building codes, and they affect mitigation activities on how we’re going to respond during a flood,” said Pascrell.

Retired city resident, Mable Richardson, who lived in the People’s Park neighborhood for 30 years without flood issues spoke out about the punishing flood insurance rates her and her neighbors have been paying.

“Some people are paying from $700 to $3,500 per year for flood insurance. I don’t think it’s fair that we have to pay flood insurance when we do not get flooding. There has been no claims, and it’s only this one block on East 30th street that’s paying flood insurance. Not on Trenton Avenue, not any of the houses behind me,” said Richardson.

Fed up at paying the insurance premiums for no apparent reason other than a designation her home is in a flood zone, Richardson took action contacting her councilman and congressman.

Andre Sayegh, 6th Ward councilman, said because of a phone call made by Richardson, the congressman contacted FEMA’s Mitigation Assessment Team about the erroneous flood zone designations of areas that never flood.

Pascrell, Torres, and Sayegh hosted the press conference outside of Richardson’s home.

“We found out that it wasn’t just [her] who was affected by [flood zoning], but it was many residents,” said Sayegh. “So we went to FEMA and ultimately through the work of Congressman Bill Pascrell we are one step closer for relief.”

That relief won’t be coming for residents until the beginning of 2017. The number of people likely to be impacted by the revised flood maps is not yet clear.

Another resident, Anthony Gray, who also lives on East 30th Street endures a perplexing insurance situation between his house and garage.