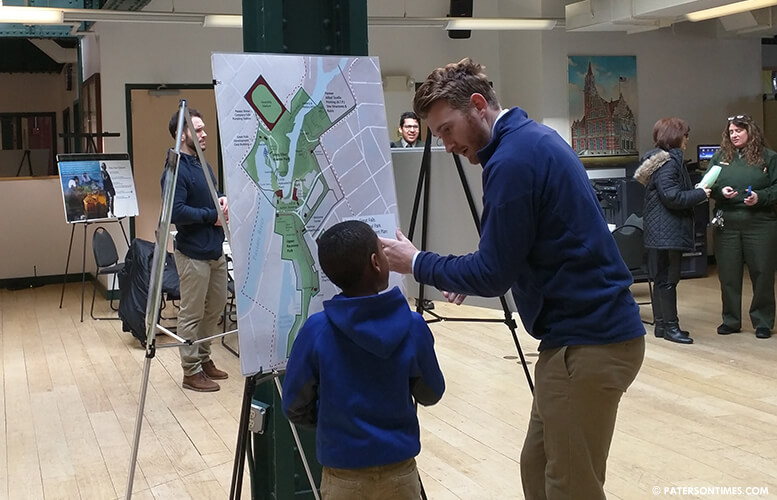 Dozens of people came to the open house hosted by the National Park Service on Saturday to learn about the Great Falls National Park general management plan and comment on the options.

A city resident Anthony Scareon came to the open house to learn more about the various plans. He sat through a presentation provided by Helen Mahan, project manager for the general management plan, in which she highlighted the difference between the alternatives.

Alternative B focuses on the natural beauty of the 52 acres park while Alternative C pays great attention to the industrial heritage of the area. There’s also Alternative A which preserves the status quo. The federal government typically has a preferred alternative, but in this case it opted not to lean towards one or the other alternatives.

“It’s very exciting for me as a homeowner,” said Scareon who lives in the historic Cooke Mill Building not far from the park. He said he was not ready to comment on the proposals or pick one or the other.

Scareon, who works as the manager of administration and board relations at the Mayo Performing Arts Center in Morristown, said he downloaded the digital copy of the plan to read before submitting his comments.

Scareon will be able to submit his comments via the National Park Service website when he is ready.

“You don’t have to vote for one or the other,” added Leonard Zax, of the Hamilton Partnership for Paterson, who serves on the park’s advisory commission. He and others have said they would like to see a fusion of the two plans.

“We’re going to make it even better,” said Zax.

Ranu’s interest in the raceway doesn’t just stem from his background as an engineer. He said his grandfather learned to swim in one of the raceways.

Jennifer Ranu, the engineer’s mother, who lives in Wayne, said her family immigrated to the Silk City from Italy. She taught at School 27 in the city and is now retired. The mother also recalls performing as a Central High School cheerleader at the historic Hinchliffe Stadium.

“We have to preserve this for the future generations,” said the retired teacher, who once lived on Jersey Street.

Young people have been involved in the commenting process as well. Manny Martinez, who teaches at the Community Charter School of Paterson, submitted 150 comment sheets completed by fourth grade students to the National Park Service.

Martinez said a representative of the park informed the students about the proposals before they were allowed to comment. “Most students want B plus C,” said Martinez. He said many like the recreation ideas mentioned in Alternative B.

Display boards on easels at the New Jersey Community Development (NCDC) building detailed the many aspects of the 222-page management plan. Park staff members superintendent Darren Boch and ranger Ilyse Goldman helped those who attended the open house understand the different elements of the plans.

Others provided tours of the park to the open house attendees.

The 60-day comment period for the general management plan which will guide the park for the next 20 years closes on March 6th, 2016. After the deadline, it will take about a month to review all the comments, said officials.

The advisory commission will make its recommendations in its April meeting after which a new alternative will be available based on the comments and recommendations. By the end of May, the plan is expected to go into implementation, said officials.

So far the federal government has acquired the visitors’ center on McBride Avenue. It is in the process acquiring Mary Ellen Kramer and Overlook Parks.

Review the plans and make your comments before the March 6th, 2016 deadline by going to the National Park Service website.