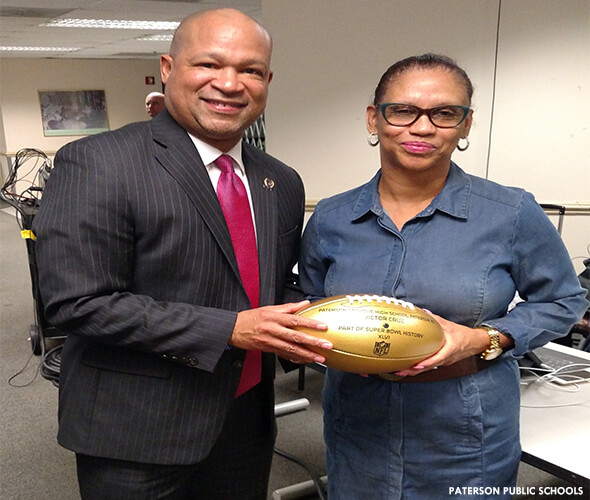 Eastside High School received a golden football from the National Football League for the 50th anniversary of the Super Bowl for Victor Cruz’s appearance in Super Bowl XLVI.

The high school became one of more than 2,000 schools across the country and the world to receive a Wilson Golden Football. The NFL is recognizing 3,000 players and coaches for the anniversary. A high school is given the honor for a player or head coach who graduated from the school and was active on Super Bowl roster, according to the league.

In cases where the high school of a Super Bowl player or head coach no longer exists an alternative school is selected, according to a letter from the NFL sent to the district. Cruz also attended School 21 before Paterson Catholic High School, said Wimberly.

Cruz’s mother Blanca (pictured, right) presented the golden football at Wednesday’s school board meeting to Wimberly who she described as a mentor and a father figure to New York Giants football star.

“We applaud you as the mother of Victor. I know you’re proud of him as we are and the entire city of Paterson,” said deputy superintendent Eileen Shafer.

The football will be displayed in Eastside High School. The high school will receive a NFL character education curriculum and be eligible to apply for a $5,000 grant from the league to further its football program.

“Everywhere he goes he proudly tells them he’s from Paterson, New Jersey. He lets them know where he’s from,” said Cruz’s mother.

Cruz scored the game winning touchdown in 2012. Two years later, Mike “Pops” Adams, another Silk City Native, who plays for the Denver Broncos, made it to the Super Bowl.

Cruz continues to show up at various venues to inspire young Patersonians. He most recently attended the district’s science fair to encourage students to pursue their dreams on the field or off.