The Silk City has been ranked as one of the safest cities in New Jersey for drivers because it has the fewest speeding related deaths compared to other municipalities, according to National Highway Traffic Safety Administration data analyzed by ConsumerAffairs, a national consumer advocacy group. 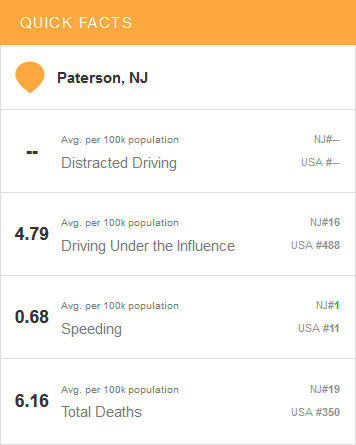 There were 0.68 cases of reported speeding fatalities per 100,000 area population, according to the study which looked at data from the 2014 National Highway Traffic Safety Administration Fatality Analysis Reporting System.

ConsumerAffairs ranked municipalities around the country based on distracted driving, driving under the influence (DUI), speeding, and total per capita deaths resulting from each.

Other major cities in New Jersey also received high rankings. For example Newark and Jersey City came out second and third in the study in the speeding category.

Jersey City ranked safest in New Jersey for fewest DUI deaths. Bayonne had the fewest distracted driving deaths, according to the study.

Paterson is ranked 11th in the country for having fewer speeding deaths, according to the study.

ConsumerAffairs created an interactive map for consumers to understand driving risks in their communities. The map shows cities in New Jersey as well as in other states.