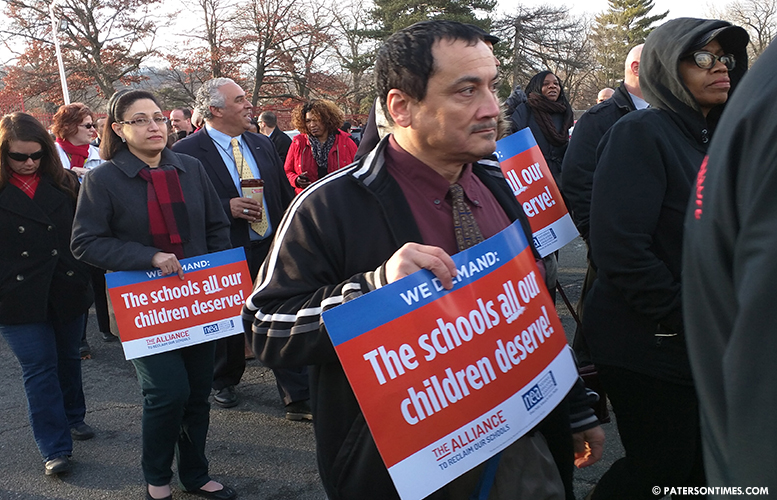 “Public education is under attack,” said John McEntee, president of the Paterson Education Association, the 3,000 strong teachers union. “We really need to put our heads together to try to find things that are outside of the box to make it work for everyone.”

McEntee said the walk-in, supporters of public education walking in together into a school building, symbolizes the collective action needed to preserve public schools. He said at various city schools the rallies included teachers, education advocates, local officials, and residents.

Teachers at John F. Kennedy High School walk-in were worried about making it work for their students with diminishing resources.

“We’re hard pressed for all kinds of materials,” said Vincent Marchese, a social studies teacher at John F. Kennedy High School. He said schools are utilizing worn out and outdated books. Classrooms equipped with white boards are having to resort back to using a black board and chalk due to lack of repair money, he said.

Marchese said these are the result of lack of funding and budget cuts at the district. This year, the district is facing a $45 million budget shortfall, according to education officials.

Nicholas Vancheri, a principal at the Science Technology Engineering and Mathematics at John F. Kennedy High School, said he was principal at School 7 last year when more than 360 staff members, including large number of teachers, were axed.

“It was tough,” he reflected on the situation he faced at the small Ramsey Street school. “If you can at least ensure there are well-qualified, talented teachers in the classrooms, that’s the first of many steps. That’s a big first step.”

“Fund our schools. Give us adequate funding,” added Rosie Grant, executive director for the Paterson Education Fund, an education advocacy. The district has been underfunded for the last half-decade, according to education advocates.

Paterson schools have been underfunded by as much as $173.8 million over the past six years, according to the Education Law Center.

Most everyone agreed the district needed more funding to provide a decent education to its more than 28,000 students.

Pringle said public schools are being “dismantled” throughout the country. She worried about the broader consequences of having a struggling public education system in America.

“Public education is the foundation of our democracy,” said Pringle. She said today’s walk-in rallies which are being held at 1,000 public schools in more than 30 cities across the United States are raising awareness about the plight of public schools.

“I think it’s very symbolic we’re all walking in, arm and arm, because that’s what it takes to have strong schools in strong, thriving communities,” said Sean Spiller of the New Jersey Education Association.

“We really need to make a major advancement in public education,” said assemblyman Benjie Wimberly. Such an advancement, said many at the walk-in rally, may not happen absent more funding for public schools.