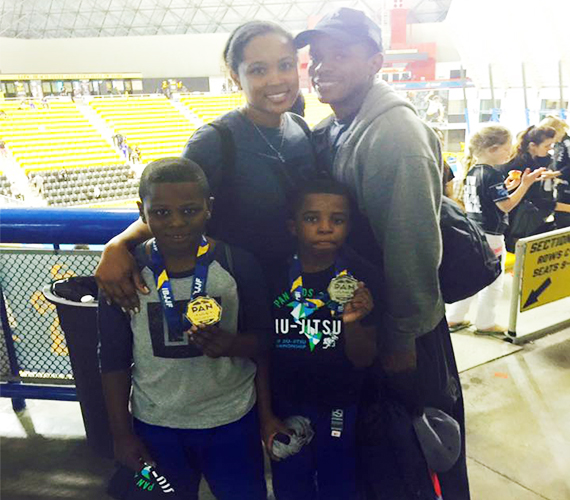 After two years of training and competing locally, two city brothers won gold and silver medals at this year’s Pan Kids Jiu-Jitsu Championship which took place in California earlier in the month.

Jason Lambert Dixon Jr., 8, and Jalen Malik Mitchell, 9, both School 9 students, traveled with their parents to Long Beach, California to compete in the championship competition held on February 14th, 2016.

“I’m very proud of them. It’s the culmination of all their hard work that they put in,” said Naji Mitchell, father of the two step brothers. He said he got both third graders involved in jiu-jitsu about two years ago.

“They have been training pretty faithfully since then,” said Mitchell. The father said he got interested in jiu-jitsu five years ago and operates the Totowa jiu-jitsu school.

The father also thanked assemblyman Benjie Wimberly for making a donation that helped pay for plane tickets to California for the competition.

Dixon’s mother Tracia McDonald also played a key role in supporting the boys, said Mitchell. The two boys, their parents McDonald and Mitchell visited California for the first time to attend the championship, said the father.

“The next step. They are training for the American nationals in Las Vegas in July that’s the next international level tournament. In the meantime they will be competing in local tournaments throughout the tristate area,” said Mitchell.

The two boys will be recognized with proclamations at an upcoming meeting of the city’s governing body, said Andre Sayegh, 6th Ward councilman, who represents the area where the family lives.

“These young men make the 6th Ward look strong and all of Paterson should be proud,” said Sayegh.