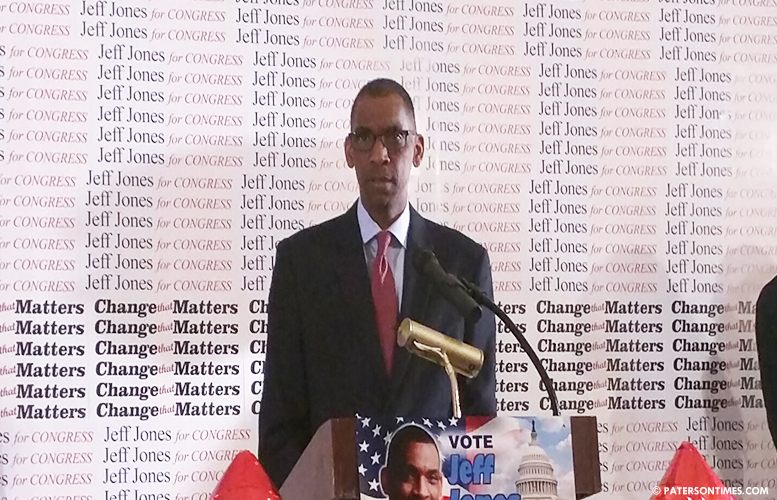 Jones said he will run as a Democrat to challenge Rep. Pascrell in the June primary for the 9th congressional district seat.

“If that doesn’t work, independent is an option,” said the former mayor. He said his run for Congress began as a “simple what if” which culminated in today’s announcement after more than two weeks of rumors.

Jones pulled out two miniature American constitutions from his pocket. “I read nothing that implies or speaks to that the term of office is a lifetime appointment,” he said taking aim at the popular incumbent. “Part of this campaign is to break the cycle of incumbency.”

Pascrell, a former city mayor, has been in office for 20 years. Jones said he has worked on the congressman’s campaign several times, but when he sought assistance as 1st Ward councilman he did not receive much help.

“This city, which you proudly boast as your home, has suffered too long. And if you can’t fix it. It’s time for change,” said Jones.

Jones had a bitter relationship with Pascrell while mayor. Jones backed Pascrell’s challenger Steve Rothman in a grueling primary race in 2012. Pascrell mobilized his supporters and defeated Rothman.

Jones suffered a bad defeat in the 2014 mayoral election coming in fourth place. His tenure as mayor was marked by scandals and large tax increases.

The announcement took place at the Masonic Lodge on Broadway and was attended by about 30 people. Jones’ friend Erik Lowe, who is seeking a run in the 5th Ward, explained away the low turnout stating the event was a press conference.

Jones also took about 10 questions from attendees at the event.

No one brought up his rocky four years as mayor of the Silk City. Lowe and another Jones supporter floated the idea of putting together a chart that would highlight the accomplishments of city mayors going back to Pascrell.