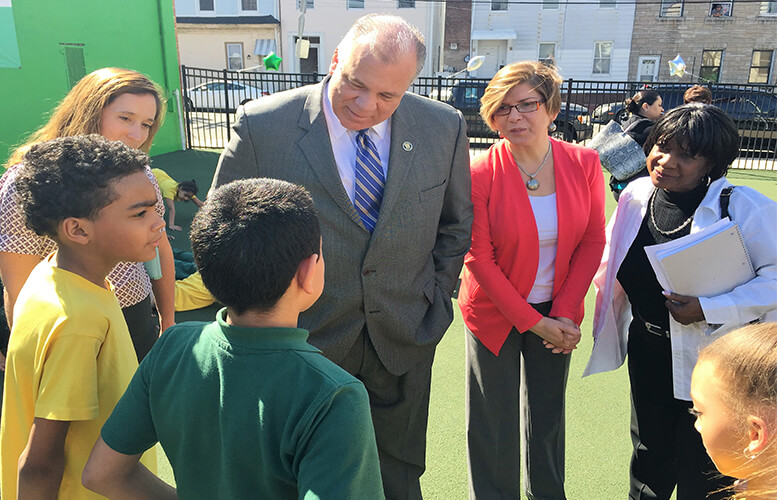 The city wants to a new promise neighborhood in the 4th Ward to try to address the social ills that plague the most crime-ridden part of the city.

“The Promise Neighborhood initiative has proven successful in revitalizing distressed neighborhoods block by block, helping to break the cycle of poverty and offer greater opportunities to the people who live and work there,” New Jersey Senate President Steve Sweeney said while touring the Great Falls Promise Neighborhood with local, state, and federal officials on Wednesday.

Sweeney, who is seeking the Democratic Party’s nomination to run for governor, wants to see the state’s promise neighborhood initiative expanded throughout the state. Recently, State Senator Nellie Pou introduced a bill to form a 20-member commission that would study the federally designated promise neighborhoods in Newark and Camden while working on expanding the initiative to Trenton, Paterson, and Vineland.

Paterson’s one promise neighborhood has a state designation.

The New Jersey Investing in You Promise Neighborhood Commission will present a report to state officials within a year after it is established.

“We know that too many of our children and families are living in environments where they feel they are unable to reach their fullest potential,” Pou said. “They are in circumstances in which student achievement, secure employment, and a safe and healthy living environment seem out of reach.”

Pou’s bill appropriates $2 million in funding for the program.

The commission will examine neighborhoods where nonprofits, public/private partnerships, and higher education institution can work together to rebuild an area block by block. Developed by President Barack Obama’s administration via the U.S. Department of Education, the promise neighborhood initiative looks to improve education outcomes for children in distressed urban and rural communities.

“In order for our neighborhoods to thrive, our kids need access to first-rate schools and support from their families and communities. The Promise Neighborhood program lays that foundation by supporting students and their families with critical resources,” Rep. Bill Pascrell, Jr. said.

Pascrell said he cosponsored the Promise Neighborhoods Act which will continue to fund the program.

Promise neighborhoods provide wrap around services through schools while building an ecosystem to assist young children to get on the path to birth through college and career.

Pou describes it as ensuring children go from the “Cradle to College or Career.”

Mayor Jose “Joey” Torres expressed excitement at the prospect of expanding the program to the 4th Ward.

“We need to make the targeted investments to give our communities and their residents the opportunity to succeed,” Torres said.

The Great Falls Promise Neighborhood run by the New Jersey Community Development Corporation is the model on which the new one is being planned.