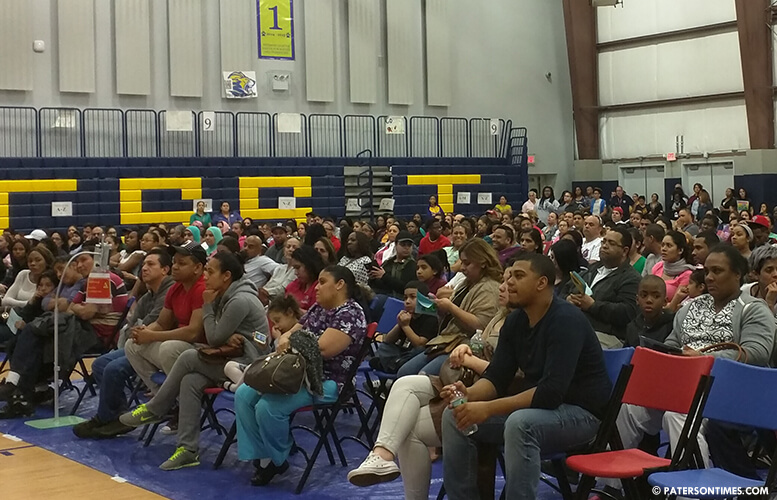 More than a thousand parents and children descended into the auditorium of the Paterson Charter School for Science and Technology on Thursday afternoon in hopes of being accepted to the school.

80 kindergartners were accepted to the school through a computerized lottery leaving over a thousand parents and students disappointed. Roughly 1,300 students applied to the school in grades K-12, according to the charter.

“I’m very happy he got accepted,” said Jason Rowe Sr., whose four-year old son’s name appeared on the large projector screen atop the stage, on which parents and children’s attention was fixed for about half-hour.

“It’s surprising, but that’s how you know the school is really good,” added Leskila Williams, mother of the four-year-old, about the large number of applicants. She said she cares about class sizes and has received testimonies from other parents the K-12 charter school keeps classes small.

Williams has two children. She is looking to get her 13-year-old, who is finishing up 8th grade at the Community Charter School of Paterson, into the Paterson Charter School for Science and Technology.

Williams is hoping the sibling preference the charter school has will help her teenage son to get into the school.

Rowe and Williams’ son was lucky to be accepted at the school because just about everyone else got on the waiting list.

“I was hoping, but we didn’t get it in,” said a visibly dejected Tamicka Byrd, whose eight-year-old son Rymir Gibson attends School 4. She wanted the third grader to get into the charter school because of the extracurricular activities the school offers to its students.

Gibson is number 240 on the 4th grade waiting list.

The school did not have a single opening in any of its grade levels save kindergarten, according to a booklet handed out to parents. Byrd said she was informed there were no slots for fourth grade, but a school representative said she may still attend the lottery.

Being 240 on the waiting list leaves no chance of her son getting into the charter. She said she plans on applying next year for a higher spot.

“Until we have students who transfer out of our school to other communities or change their school, we have no spots to offer, because as the sixth graders move to the seventh grade they stay here,” said Joseph Miceli, director of curriculum and instruction at the charter.

Some parents were frustrated that their children were not able to get into the school after applying multiple years.

“Unfortunately, that’s the case,” said Riza Gurcanli, principal or lead person at the charter, when told about the discouraged parents. He said the school does not have seats, noting it has been accepting only kindergarten students every year who are able to go all the way through high school at the charter.

“For the other grade levels mostly siblings are taking the seats,” he said mentioning the sibling preference.

When Gurcanli speaks about accepting children, he says accepting a family.

Yanyun Liu has been attempting to get her son into the school for the past two years. “I’m not going to again,” she said.

“We’re hoping to get an expansion with our renewal next year,” said Gurcanli. He said the state has to approve the expansion before the school can offer additional seats.