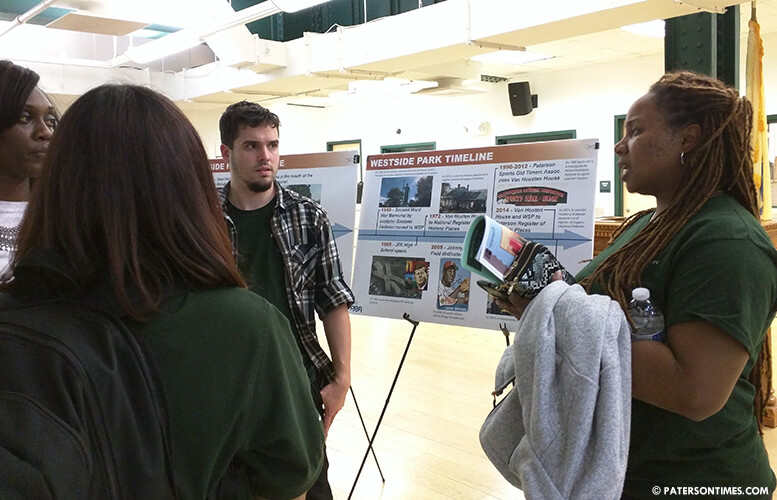 City residents had a chance to share their vision of what a revitalized Westside Park should look like on Thursday evening. Many welcomed the prospect of seeing the jewel of the Hillcrest section finally receive the attention it has gone without for years.

“This park is not just a park that was designed haphazardly,” said Passaic County freeholder director Theodore “TJ” Best. It was designed by the Olmsted Brothers who also designed the Central Park in New York City, he said.

Best lamented the current state of the park. “The historic beauty of the park fell on the wayside,” he said. The freeholder director said he has been calling for a master plan for the park for the past several years.

With the New Jersey Community Development Corporation (NJCDC) leading the effort to revitalize the Westside Park, master plan is expected to be finalized by June of this year. Charlie Cunion, planning and landscape architect of Parsippany-based RBA Group, said a draft of the plan will be ready in May and a final plan will be completed by June.

Cunion said there’s a great momentum to renovate Westside Park as a result of the nearby Great Falls National Park. His company will take an inventory of all the historic resources of the park, it will also take a tally of all the activities that took place at the park during its thriving years and see if some of them can be revived.

“It was a pretty fancy park back then,” said Cunion.

The 28-acre park got its start in 1889, when the city’s parks commission began developing Westside Park.

Andrew Wright, who lives in the Hillcrest section, said he would like to see the Totowa Oval, the pavilion, the river walk, and the landscaping in the park brought up to date.

“My main thing would be the pathways and the landscaping,” said Wright. “If they beautify the park people will come here.”

Wright was one of 19 people who attended the public meeting on the master plan at the NJCDC building on Spruce Street. He said he would also like to see the historic Van Houten House – where George Washington spent some nights as a guest in 1780 – restored.

The Van Houten House is listed on the United States Register of Historic Places.

T’Shayla Thorpe, who lives on Ellison Street, said she holds a picnic at the park every summer. “There’s no grill, no benches, no tables,” she complained. She said she would like to see a revamped picnic area at the park.

Some also raised concerns about chronic flooding at the park.

The event also attracted old timers who have witnessed the park in its heyday. Anthony “Tony” Vancheri recalled the summers he enjoyed at the park swimming in the Passaic River. “We used to dive from the bridge,” he said of the bridge that connects Westside Park to Pennington Park.

Cunion said the park may need a second bridge to Pennington Park closer to Glover Avenue.

Vancheri’s brother Joe Vancheri pointed to John F. Kennedy High School on a map showing the park and said, “This was the ruination and the downfall of the park.”

The space occupied by the high school since 1965 used to hold beautiful flower gardens, he said. The Vancheri brothers said neighborhood residents unsuccessfully fought against politicians to block the school construction at the location.

Tony Vancheri said the political machine at the time ignored the residents and built the high school there anyway.

Both Vancheris said the park has been neglected for far too long and requires attention. The master plan will allow the city and NJCDC to apply for grant money from the state and the county to undertake a piecemeal revitalization of the park.

Kathleen Caren, open space coordinator for Passaic County, said having a master plan helps, as 16 municipalities compete for about $5 million of open space money. She said a master plan gives a grant application preference over others without one.

The master plan is the first step in getting the Westside Park revitalized, according to officials.