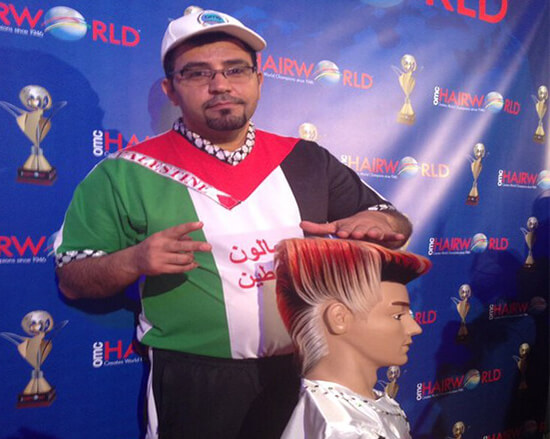 When Raed Odeh opened his barbershop in South Paterson he accomplished a portion of his childhood dream.

“I was a little kid who thought one day, I can achieve, and open my own hair salon and serve the people in a place that I own,” said Odeh, owner of Palestine Hair Salon, which opened in July of 2000.

Odeh achieved. Now, his dream is to be the best in his trade. Over the years he earned more than 40 titles from competing in hair styling and barber competitions throughout the United States.

“You know, when you like something, you always like to get better, and you like to always strengthen your skills by seeing what others have,” he said. He said he began taking part in competitions largely to learn from others.

Odeh also competed globally. He has been training over the past year, for the biggest hair styling competition in the world: the Organisation Mondiale Coiffure (OMC) Hairworld World Cup in South Korea.

Odeh, 43, plans on using all he learned from his competitors in previous battles as he heads to the international competition. Every month, for the past year or so, he has been going to Hartford, Connecticut once or twice to train with master hairstylist Andrea Turrisi in preparation for the big competition.

“We train for at least 8 hours a day, straight. After that, between customers, if I’m not busy, I have the mannequins in my shop so I spend a lot of time on them. Even after work, when I go home in my basement I spend three to four hours every other day after that,” said Odeh.

He said he is prepared for the competition with two unique styles he calls the “Creative” and the “Classic.”

“This is not something we do daily at our shop. No customer will walk in and ask you for such a style. It’s kind of like, crazy a little bit, but it also has different directions, different moves,” he said. “The length of the hair, the color of the hair, and the directions of what you make with that mannequin. It’s not the typical things you do on a daily basis which makes it more fun.”

He will be competing as a member of Team USA which is made up of the best hair stylists in the country. More than 50 countries, each with teams consisting of 20 to 30 people, will be taking part in the competition in Seoul from March 27-29th, 2016.

Odeh is leaving his home in Clifton today to fly to South Korea. He did not always live in Clifton. He immigrated to Paterson in 1991 at the age of 18 from Bethlehem in Palestine. He said he traveled alone to the Silk City where he had family members.

“Paterson was the first area I moved in to. When you move somewhere you always like to stay where you are at,” he said. He has remained in Paterson spending most of his time during the day running his shop on Main Street.

He said he is going a week ahead to the competition to acclimate himself to the climate and atmosphere. “Get your body rested before the competition,” he said. Indeed, without good rest, dreams are harder to realize.

“I always dreamed of being a world champion of what I’m doing,” said Odeh. “Every day, that dream is coming closer.”