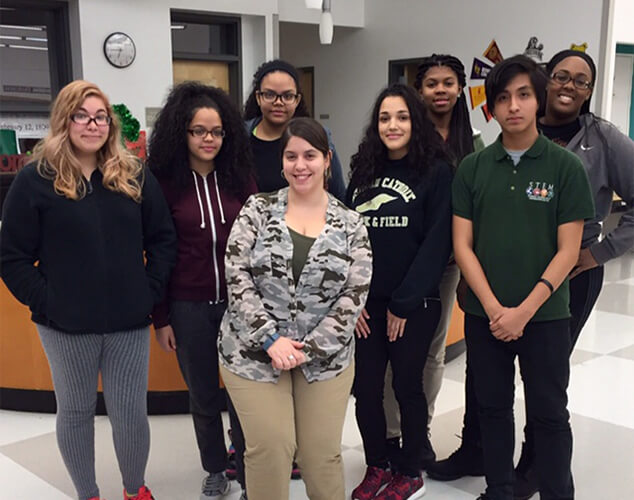 Six city students and their social studies teacher left the Silk City during spring break for a trip to Iceland where the group will explore the stunning natural landscape of the Scandinavian country and study the impact of a volcanic eruption on farming.

Social studies teacher Connie Lozada said the six-day trip will expose the students to the uncommon Nordic landscape. “A lot of what we’re going to see is not what you see here every day,” she said.

Lozada said the students will also see and learn about the impact eruption of Eyjafjallajokull, a volcano in Iceland, had on farming.

“They will tell us about the impact that particular eruption had on farming. How it affected the soil, the crops, and the effects that have lasted to today. They’re going to get an environmental feel of what’s going on in Iceland.”

When Eyjafjallajokull erupted in 2011, ash clouds hung over Europe, disrupting air travel throughout the continent.

The students will spend a great amount of time hiking in Iceland, said the teacher. They will get to see other places besides checking the impact the eruption had on farming.

The group will also visit the Blue Lagoon, a geothermal spa, on their final day.

“The kids will get to see the sun doesn’t rise until 9 o’clock in the morning,” she said. “They [Icelanders] don’t get that many hours of light.”

Hopefully the students will get to see the northern lights, said the teacher.

The teacher said the field trip is funded by a mix of parent contribution and student fundraising. She said it was planned two years in advance. 14 travelers were going to visit Paris. However, the terrorist attacks in France alarmed parents, resulting in many opting out of the trip.

Students also had to change their trip destination from Paris to Reykjavik, Iceland’s capital. “A lot of people don’t know about Iceland. So they were a little intimidated at the idea of going there,” she said.

The destination change appears prescient in light of the Brussels bombings that took place on Tuesday. Iceland is a country the size of Kentucky in middle of the Atlantic Ocean entirely disconnected from the European mainland.

The students will immerse themselves in the country’s culture and cuisine with the assistance of a native tour guide. Their experience will be documented through Instagram, Snapchat, and a video blog, said the teacher.

The seven students plus the teacher left the city on Monday for Reykjavik. The group will get on a plane on Saturday evening to return to Paterson.

“A lot of these kids don’t ever go anywhere outside of Paterson,” said Lozada. Indeed, it’s not every day a group of Paterson receive an opportunity to explore a foreign land.

Though the students will have an Iceland native as their guide. Their second guide is their teacher, who has taken students to Spain, Italy, and Ireland over the past years, she said.

“They come back different. They see the world a little differently,” said Lozada. “They start to become more global citizens.”

Lozada said the trip aligns with the theme of International High School. She said she has observed the change in her students after a trip. Though many will not turn into the next Ibn Battuta or Marco Polo they develop a genuine love for travel.

She said one of her former student is studying in the Dominican Republic while another is doing the same in Italy.

“It really does open them up to the idea that you can go out and learn and be a student of the world,” said Lozada.