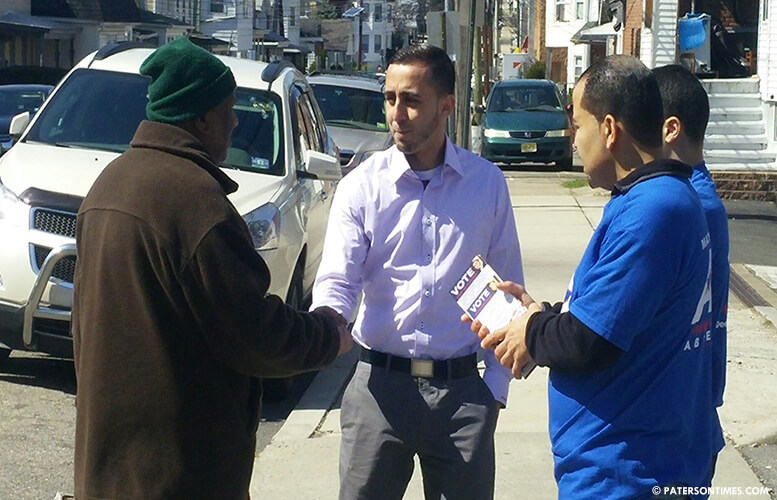 Three canvassing teams from 6th Ward city council hopeful Al Abdelaziz’s campaign handed out flyers and spoke to residents in the Lakeview and South Paterson sections on Saturday afternoon to get their candidate’s message out to voters.

Abdelaziz hit Buffalo Avenue knocking on doors with two campaign staffers. He chatted with voters who opened their doors and left campaign literature for those who did not open or were not home.

“I’ll definitely vote for you,” said Husni Obeidallah, who resides at the corner of Buffalo and Trenton Avenues, to Abdelaziz after a brief chat in Arabic.

Abdelaziz offered a lawn sign to Obeidallah who politely refused. “I really don’t like it,” said Obeidallah of lawn signs.

As he continued knocking on doors Abdelaziz saw two women chatting and doing their nails on the porch. He approached to introduce himself as a candidate.

“The city’s dysfunctional,” he told the two women in their 30s. “Taxes have constantly gone up.” Abdelaziz promises to stabilize taxes. He said he would demand a budget early on in the fiscal year to trim spending so as to avoid last minute scrambling to reduce spending when much of the municipal dollars have been spent.

When asked whether he intends on opposing budgets that have large tax increases, he would not provide a definitive answer.

The two women were receptive, but still undecided.

Abdelaziz, 28, turned the corner from Trenton to Dundee Avenue, where the incumbent Andre Sayegh lives.

“What you doing here! You’re in Sayegh country!” joked freeholder director Theodore “TJ” Best as he pulled into his driveway.

“I can’t vote for you,” said Joseph Wyka who lives on Dundee Avenue. “He’s a longtime friend. I vote for Andre.” He said he has been supporting the incumbent since Sayegh’s school board days.

Jaber offered to install as many Abdelaziz campaign lawn signs as he can fit in front of his home. “Fill up the whole front yard,” he said.

Abdelaziz turned from Dundee Avenue to Lakeview Avenue where he met with Frank Graziano.

Graziano complained about the poor job the city has been doing in maintaining clean streets. “They come sometimes. A lot of times they don’t come,” he complained.

Abdelaziz pointed out Lakeview Avenue is a county road. He told Graziano he would call the county to clean up the garbage that has accumulated on the street,

Graziano also complained about his taxes. “I thought it was 2% in New Jersey. What is it, we’re special here?”

Graziano also expressed disgust at the mayor’s use of public works employees at his home on taxpayers’ money. “He’s abusing my money,” he said.

Torres denied using taxpayers’ money, but timesheets later showed three public works employees billed and were paid using Graziano and other homeowners’ money for work they did at the mayor’s Arlington Avenue home.

Abdelaziz received a second cold reaction at Graziano’s neighbor’s home. A woman opened the door, appeared receptive, but when Abdelaziz said he is running against Sayegh, she remarked, “I won’t vote for you then.”

Abdelaziz knocked on 60 homes in the Lakeview section. He received mixed reactions, but in his neighborhood South Paterson voters reacted with great enthusiasm and support.

“He shoveled the whole block for us,” said Mohammad Deeb, who lives on Gould Avenue, referring to a late January snowstorm that left many side streets impassable. “He gets everything done.”

“When he becomes councilman our streets will at least be plowed,” added Sameer Atshan. He also criticized Sayegh. “Once that mayor thing started, he completely forgot the 6th Ward,” he said.

In South Paterson, unlike the Lakeview section, crime is an issue. Abdelaziz said he plans to advocate for a police substation to be located at the South Paterson library.

A number of council members have advocated for substations over the past year. None of them have received one. Mohammed Akhtaruzzaman, 2nd Ward councilman, who serves as chairman of the public safety committee, managed to get the police traffic division to operate out of the old Grand Street firehouse.

Abdelaziz has a base in the Palestinian-American community. His father, Ribhi Abdelaziz, who immigrated from Palestine, has been living in South Paterson since the 1970s. His oldest brother, Ehab Abdelaziz, served as a city police officer until he fell among the 125 police officers laid off in the 2011.

Ehab Abdelaziz now works as a police officer in Jersey City. “I still love this city that’s why I live here,” he said.

Al Abdelaziz has 7 siblings — 6 brothers and 1 sister — including himself. His family has been working on his campaign getting the word out. His father, who speaks fluent Spanish from having resided in Puerto Rico for four years as a student at the InterAmerican University of Puerto Rico studying biology, has turned into an asset.

The father shared his son’s platform to Spanish speakers who opened their doors.

When he isn’t campaigning, Al Abdelaziz works as supervisor of athletics at the Passaic Public Schools, where he was hired in October of 2014 for $117,000, according to government records.

He attended Passaic County Technical Institute (PCTI), before obtaining a degree in exercise science from William Paterson University. He then attended the University of Scranton to secure a master’s degree in education administration.

Al Abdelaziz taught as a gym teacher at his old high school before taking the Passaic job. On the campaign trail, many expressed support for him in ethnic solidarity.

“I’d like to see him get in. He’s one of my people,” said Atshan referring to Abdelaziz’s Palestinian heritage.