Abdelaziz’s campaign alleged Sayegh has been breaking New Jersey election laws by failing to print a “paid for by” line on campaign materials. Several of Sayegh’s lawn signs do not state they were paid for by the incumbent.

“This was brought to my attention by an upset resident who asked, ‘Who is paying for his literature?’” said Abdelaziz. “The residents of the 6th Ward deserve transparency, and deserve an answer. I’ve knocked on over 1,000 doors and I don’t believe one resident would approve of not having ‘paid for’ lines on a candidate’s materials. For the rare person that does, they can stop by his headquarters and get the complete set of ‘Shady Sayegh’ campaign material.” 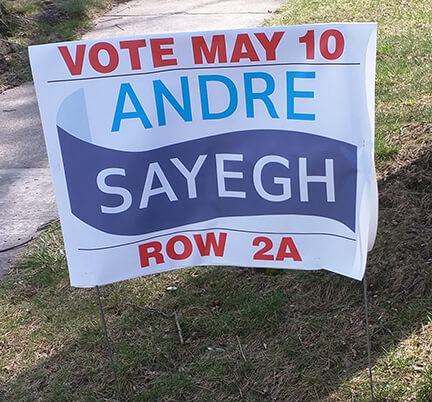 Sayegh’s election lawn sign without “paid for by” label.

All candidates are required to label all political communications, with the exception of tiny items like buttons and combs, with “paid for by” statements, according to the New Jersey Election Law Enforcement Commission (ELEC) compliance manual for candidates.

“We can create stickers and put them on the lawn signs,” said Sayegh. He said his campaign has been filing timely reports with ELEC indicating the lawn signs and other materials were purchased through the Friends of Andre Sayegh account.

The Sayegh campaign also has not been reporting donors’ occupation and employer information over the past nine years except intermittently, according to a review of his campaign filings going back to 2004.

“All candidates are supposed to include the contributor’s employer information and occupation,” said Joe Donohue, deputy director of ELEC, on Tuesday afternoon. Speaking generally, he said incomplete reports can be amended and there’s no restriction as to how many years back a candidate can go.

“Where it’s appropriate we can amend those reports. We’ve done that in the past,” said Sayegh. “I’ll have my treasurer look at the reports and if there are employers left out we will amend them.”

“As a person who ran for office numerous times he should have known better and understood the rules of ELEC,” said Abdelaziz. “He could amend the reports, but it’s a clear violation of ELEC.”

This was not always the case, for example in 2004, 2005, and 2006 Sayegh reported both occupations and employers information for his donors. Beginning in 2007, many reports did not contain a given donor’s employer’s name, address, and occupation.

Abdelaziz’s campaign also failed to fully report occupation and employer information for donors in their reports filed in January and March.

“He’s accusing me of the very thing he did,” said Sayegh referring to Abdelaziz. “He’s coming across as an April fool.”

After realizing the information was missing from their reports, the Abdelaziz campaign submitted amendments to ELEC, according to his campaign.