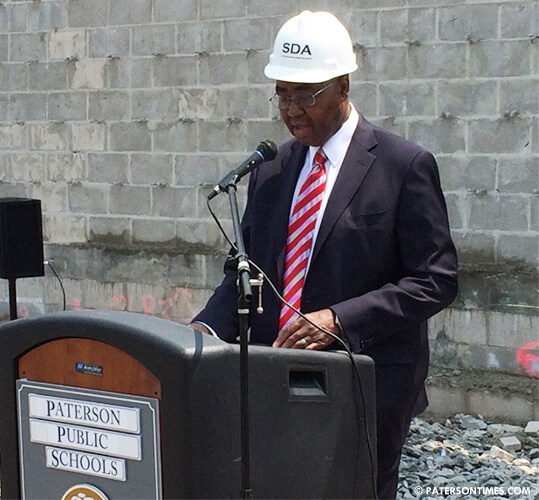 After receiving criticism from several community leaders and residents for failing to notify parents about the presence of elevated levels of lead in water supply at 14 schools, state-appointed district superintendent Donnie Evans on Wednesday evening apologized to parents for not notifying them.

“Regretfully, parents of students enrolled in impacted schools did not receive information about the 2014-2015 testing until recently and for this I apologize,” wrote Evans in a memo distributed to school board members.

“Parents should have been notified there’s no questions about that,” said Evans.

Parents were not informed of the lead contaminated water supply at the schools until a report Friday in the Bergen Record.

Lead testing conducted at 44 buildings at the recommendation of the district’s facilities director Steve Morlino discovered water fountains at 14 schools had lead levels above the 15 parts per billion (ppb) “action level” threshold outlined by U.S. Environmental Protection Agency (EPA) guidelines, according to the district.

In schools 6, 9, and 28 reading surpassed 230 parts per billion, according to the district’s results.

Nine schools had one lead contaminated water source each.

“There was no school facility that had a problem; the problems occurred with specific outlets — like a faucet — and if tested higher than EPA guidelines, the district made necessary repairs to that outlet,” reads Evans’ memo.

“For two years. I think it’s a travesty,” said Joe Atallo, former school board member, noting the testing was done two years ago. He thought the district had plenty of time to notify parents.

Evans’ memo states most of the schools were well within EPA’s established limits. Experts have said no amount of lead in drinking water is safe.

“Water outlets or fountains found to be out of compliance were immediately shut down and or replaced or repaired,” reads Evans’ memo. “Subsequent testing was done to ensure they were in compliance with EPA thresholds.”

The district has undertaken annual random testing of water at its facilities, according to the memo.