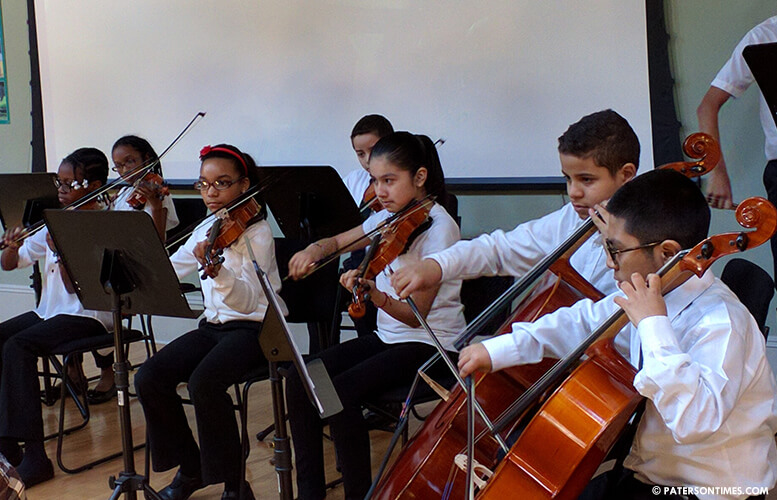 Fifth grader Janayah Davidson can play the xylophone, the bucket, and the violin because she has been spending six hours every week with the Paterson Music Project since second grade.

Davidson was among 25 students to put their practice to use on Thursday morning to evoke admiration and reverence among more than 100 people at the Rogers Building with their performance of Antonio Vivaldi’s masterpiece “Spring.”

The students left the audience mesmerized with their performance.

“Many did not know what a cello or a violin was until this project,” said Manny Martinez, former school board member, speaking about the Paterson Music Project, which now has more than 200 city students.

“I wanted to learn to play an instrument,” said Davidson, a student at the Community Charter School of Paterson, who had the opportunity to join the El Sistema-inspired program in January 2013.

Davidson set out to learn the violin and quickly picked it up. “It wasn’t hard,” she said exuding confidence. Instructors Shanna Lin, associate program director for the project, made it easy for the likes of Davidson, whose chances of receiving music instruction were slim.

Music instruction have been cut in all urban cities; large number of music teachers were cut in 2009 at the public schools, said Jeffrey Grogan, founder of the project.

Grogan began the project at the charter school with 32 second graders after forging partnerships with the New Jersey Community Development Corporation (NJCDC) and the Wharton Institute for the Performing Arts. In 2015, the project expanded to include School 1 and School 26.

The Wharton Institute for the Performing Arts runs the Paterson Music Project and requires all schools it works with to have a music teacher.

“Our programs are a supplement and an enhancement to the work public school teachers do during the day they are not a replacement for them,” said Karen Deschere, executive director of the institute. “Music and arts education in our public schools are a necessity for the complete education of all students. They are not an option.”

“It’s the best program,” said Mary Luz Valerio, whose son Hector Otero, 10, participates in the program, which takes students from grades 1-8. “I hope it never ends.”

Valerio said the program has helped her son do better in school. She said his mind has been refocused towards education and he looks forward to practicing after school every week. She said her son spends less time on television and video games and more time on practicing his instrument.

“She’s more focused on school,” said Coral Rodriguez speaking about her daughter fifth grader Rashell Martinez, who plays the viola. She said she can’t keep her daughter away from school even when the 5th grader is ill because of the after school music program.

“They’re getting to express themselves,” said Lin. “Every day they are practicing. They learn they can get good at something. They have another skill that’s special to them.”

Lin said being good at an instrument often translates into being an academically good student.

“Those of you who know how to play a musical instrument know how difficult it is to learn an instrument,” said Grogan. “When you learn how to do that it makes so many other things in life work better. You’re a better student, you are a better human.”

Martinez, the former school board member, said he would like to see a Paterson youth orchestra. That may happen as the program continues to expand.

Grogan said there’s plan for a Saturday program. He urged everyone who attended the breakfast event to donate time, funds, or even a building.

Bob Guarasci, head of the NJCDC, held a spontaneous fundraiser at the end of the event in which a number of people pledged $100 contributions to the program.

“I hope through their dedication and persistence the PMP can open many doors for these students,” said Liz Moulthrop, program director for the Paterson Music Project.