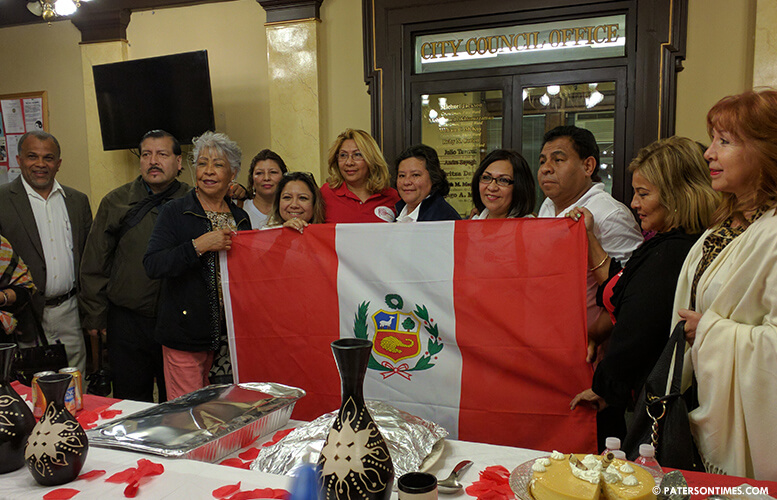 More than two dozen of the city’s Peruvian-American community members celebrated the designation of the area bordered by Mill, Market, Main, and Cianci streets as Peru Square after the city council voted to approve the designation on Tuesday evening.

“I look at this city as a quilt,” said Nelly Celi, who spoke for the group, mentioning the diverse populations that call the Silk City home. “We’re just a piece of that quilt.”

The city is home to 30,000 Peruvians, according to the resolution. Market Street is dotted with Peruvian-American owned businesses.

“They contribute so much to the city,” said Mohammed Akhtaruzzaman, 2nd Ward councilman, who jointly sponsored the resolution with Maritza Davila, councilwoman at-large.

Akhtaruzzaman cited the many businesses run by the members of the Peruvian-American community in the city. The resolution states, the city is the unofficial capital of Peruvian in the United States.

The Silk City is also home to the Peruvian consulate.

“We have nothing in the city named after Peru,” said Davila, noting the scant recognition of one of the largest South American communities in the city.  “This is an honor to all Peruvians.”

“You know my affinity for the Peruvian community. This city is better because Peruvians decided to call it home,” said Andre Sayegh, 6th Ward councilman.

Peruvians also made the third floor of City Hall better in the evening with a large spread of ethnic food. The table included dishes like a Papa a la Huancaína, Pollo a la Brasa, and Arroz chaufa.

The dishes were donated by restaurants located at Peru Square, according to Celi.

The celebration could have been postponed indefinitely without a compromise between the street naming committee and the group that sought to recognize their homeland. In fact, earlier in the year, there was a small protest at the council, which nudged the governing body to resolve a dispute over which name the street should take on: Peru Lane, Peru Boulevard.

Both sides agreed to a “compromise” with Peru Square.