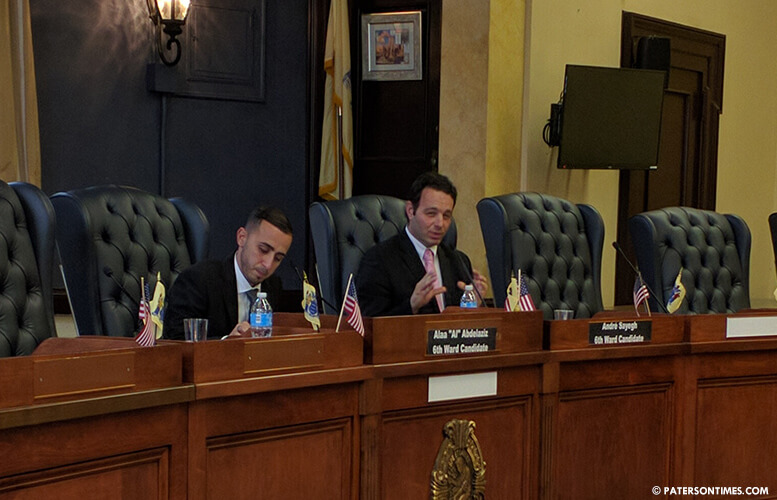 Sayegh and Abdelaziz were asked to explain the cause of recent spike in armed robberies and assaults on 21st Avenue and propose a solution.

Sayegh attributed the increase to the notorious Moya Liquor establishment and El Mexicano Restaurant. He said the approved 21st Avenue Special Improvement District will assist in providing better security at one of the city’s main drags.

Abdelaziz proposed a solution: a police substation in the 6th Ward. He attacked Sayegh for taking credit for a business curfew ordinance that has reduced non-fatal shootings by 79-percent in designated hotspot areas in the city.

“The hotspot legislation my opponent speaks about had no effect on the 6th Ward. Crime went up,” said Abdelaziz referring to 21st Avenue.

“Al, you have to do your homework, the hotspot ordinance is not in effect on 21st Avenue,” rebutted Sayegh.

The business curfew ordinance covers two segments of Main Street in the 6th Ward. Abdelaziz criticized Sayegh for adding two contiguous sections of Main Street while failing to include another portion which sees a good share of quality of life issues.

“They left out the two blocks where most of the problems occur from Goshen to Michigan,” said Abdelaziz. “The hotspot designations really had no effect on that area.”

“Al, here you go again, you haven’t done your homework,” responded Sayegh. He said prior to the ordinance there were two shootings on Main Street. “Since the implementation of that ordinance we haven’t had a shooting,” he said.

Abdelaziz said Sayegh is being reactive rather than proactive. He noted a recent shooting on Grove and Main Streets not far from former councilman Thomas Rooney’s home.

Sayegh said the hotspots are designated by police using statistics.

Sayegh’s response that the special improvement district on 21st Avenue will help improve security earned him another attack.

“Al, you’re not telling the truth, you actually stood here in support,” retorted Sayegh. “You were a supporter. When it became convenient you changed your tune.”

In fact, Abdelaziz was among a group of Main Street merchants, who came before the council in June of 2015, to lobby for a South Paterson Special Improvement District, which was opposed by a small group of warehouse owners.

“You are a hypocrite on this issue,” said Sayegh noting Abdelaziz was assigned to speak about the district’s budget in front of the council by the committee.

“I’d not support it. It’s double taxation,” said Abdelaziz when asked whether he would revive the South Paterson business district if elected.

Abdelaziz was in favor of the recreation tax, according to news reports from last year.

When some of the mayor’s allies came before the council with a box of dubious petitions to force council members into approving the placement of the recreation tax on the November ballot, Abdelaziz reportedly said the tax was needed to address the city’s “horrible” sports fields.

When asked how the city should increase its stagnant recreation budget line item both candidates suggested looking elsewhere.

Abdelaziz said the budget doesn’t have room to increase recreation funding without increasing taxes. He said the schools should be opened, so nonprofits can provide recreation to children.

Sayegh said the city should have used community development block grant (CDBG) funds to support recreation. He noted the playground he built in the Lakeview section with private donor funds.

Sayegh also noted his support for CDBG grant money the Boys and Girls Club of Paterson has been able to obtain from the city. “I’ve always been on the right side of recreation,” he said noting he voted for every resolution to approve grant funds for the club.

Abdelaziz has struggled to distance himself from Torres’ recreation tax, which voters overwhelmingly defeated at the polls. It’s not been easy for the coach to dissociate himself from the embattled mayor under investigation from the New Jersey Attorney General’s Office for using public works employees at his home for odd jobs.

Torres appointed Abdelaziz to the planning board and endorsed him.

“The mayor has endorsed you in this race. He managed to convince you to run for this office. You haven’t disavowed his endorsement. You haven’t been critical of public works employees working at his house and getting paid overtime.” strafed Sayegh. “Someone has to hold him accountable and you are not the one. You’d look the other way.”

“I never supported the mayor,” responded Abdelaziz, who backed the man he is running against in the 2014 mayoral election. “I’m not going to be a rubber stamp for no one.”

When asked which one of the mayor’s policies he disagreed with, Abdelaziz responded the mayor’s budget.

Preventing the next tax increase

Both Sayegh and Abdelaziz were asked the steps they would take to prevent another tax hike in the next fiscal year.

Abdelaziz said the city needs to hold back spending increases while growing its economy.

Sayegh said the city needs to switch to a calendar year which will move the start of the year from July to January. The state usually announces its transitional aid during the first few months of the calendar year. Often, the city’s budget adoption is delayed as officials wait eight to nine months to receive an aid number from Trenton.

When told Kenneth Morris, the council’s finance committee chairman, said the switch could be costly for the city, Sayegh replied: “He indicated there’s a potential for increase[d cost]. I was assured [by the state] it will give us breathing room.”

Sayegh also said the way to prevent tax increases is to grow the local economy. He mentioned the council’s role in creating the Economic Development Department and passing a measure to join the Garden State Growth Zone.

Abdelaziz slammed Sayegh for not doing enough to prevent tax hikes. He said the incumbent is “obstructionist” and failed to make budget cuts. Sayegh said he proposed cuts during the departmental budget hearing.

Sayegh took another shot at Abdelaziz noting the challenger was a no show at the departmental budget hearings. “It would be hard for you to reduce his line items when you’re beholden to the mayor. I’m sure he wouldn’t allow you to speak out against anything, particularly his patronage hiring,” he said.

Abdelaziz repeatedly described Sayegh as an obstructionist leading to a question about the budget battles between the mayor and the council that was cited by Moody’s to downgrade the city’s bond rating.

“I don’t consider myself an obstructionist,” said Sayegh. He said he was merely voting down “irresponsible” budgets presented by the Torres administration when asked whether his negative vote was worth the credit downgrade.

Sayegh and Abdelaziz both agreed the city’s budget problems must be resolved by growing the city’s economy while holding down spending.

“We need to do more with less,” said Abdelaziz. He said a 5-10 year plan has to be put in place to no longer rely on state aid.

“We don’t want to be dependent on the state any further,” said Sayegh. He said the council has taken step to get off state aid suggesting the $494,000 cut that Morris made in the budget earlier in the year which reduced the tax hike from 6.1 to 5.8-percent.

When asked whether Abdelaziz and Sayegh will support borrowing money for the future phases of the mayor’s road resurfacing project both suggested they may not.

“The 6th Ward isn’t getting many roads,” said Abdelaziz. “The 6th Ward is getting short changed in this plan.” He said some roads are being resurfaced unnecessarily while other, far worse roads remain untouched.

The 6th Ward is receiving 30 road segments in Torres’ plan.

“We’re driving ourselves deeper and deeper into debt,” said Sayegh. He also agreed with Abdelaziz that the worse roads are going untouched in Torres’ plan.

Sayegh was unconvinced Abdelaziz would vote against borrowing more money for Torres’ project. “You will just rubber stamp anything he wants,” he said of his opponent.

Under repeated attacks from an experienced incumbent, Abdelaziz managed to hit back several times.

“Sayegh is a habitual candidate. When a person who has run so many times and does not know how to file a simple ELEC report something is wrong,” said Abdelaziz. His campaign has been savaging the incumbent for failing to include occupation and employer information on reports going back nine years.

“He only made an issue after he rectified his own,” responded Sayegh. “It’s like the pot calling the kettle black.”

Abdelaziz initially failed to include occupations and employers information for his donors, but quickly amended his report before slamming Sayegh for the same omissions.

“We are in compliance. We sent all the amended reports,” said Sayegh.

Abdelaziz also attacked Sayegh for procuring $29,000 from Charles Florio to distribute it to parades through the Andre Sayegh Civic Association.

Sayegh said the money was never given to him directly, but earmarked for the parades.

Sayegh and Abdelaziz were also asked about the city’s collective bargaining negotiations and whether contracts with large salary hikes would get their support. The incumbent said the labor contract negotiations have “stalled” between the city and its biggest unions, police and fire.

“Taxpayers are tapped out,” said Sayegh. He said the Torres administration needs to set a ceiling when it comes to salary hikes.

“We should look for some opt-out,” said Abdelaziz. He said adding an opt-out provision for health insurance could save the city large sums of money in medical insurance expenses. Firefighters and police officers may have spouses working for governments elsewhere allowing them to use the medical coverage provided to them through their husband or wife.

Both men made their cases to voters in their opening and closing remarks.

“In South Paterson we see a building boom. That’s not by a coincidence. I’ve worked hand in hand with developers to make sure South Paterson is the most vibrant business sector in the city,” said Sayegh while asking voters to return him to office for four more years.

Sayegh listed his record of closing 9 troublesome night clubs. He noted opening a pre-school at the site of the infamous Lava Lounge on Montclair Avenue.

“If you want to be part of the obstructionism vote for him,” said Abdelaziz. “I’m not using the 6th Ward as a stepping stone to higher offices.”