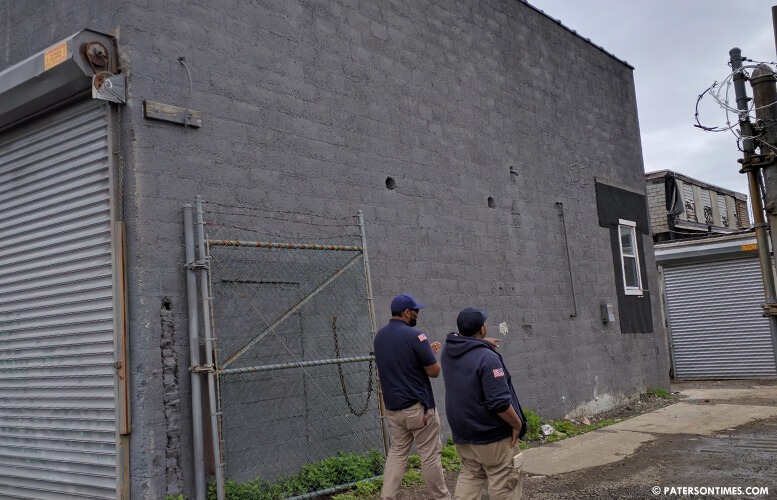 A large Warren Street building that housed six allegedly illegal businesses was shut down by city inspectors on Thursday morning.

City inspectors converged at 185 Warren Street to find the building was occupied by six businesses without any certificate of occupancy, fire sprinklers, or proper electrical connections, according to inspectors.

Fire inspectors evacuated four businesses and issued violations, said officials. Community Improvement Division inspectors Tyree Balmer and Philip Cosentino, who were outside the building at about 3 p.m. on Thursday, said the investigation into the building began as a noise complaint from neighbors.

“It’s a can of worms,” said Cosentino describing what inspectors found at the building. At the building there was allegedly an illegal gambling joint, a chop shop, and a car mechanic shop.

Fire inspectors found the building did not have a sprinkler system. The entire building was powered using an extension cable that connected to an electrical plug outside of the building, showed the two inspectors. PSEG visited the site and disconnected power to the building, said officials.

Balmer said inspectors also found half of the roof of the structure at the back had caved in. He said the owner of the building 70 Broadway LLP which is owned by George Maalouf will receive ten citations.

“We’re trying to get these people who are making it unsafe,” said Balmer. He pointed to a chemical factory across the street from the building and said if the structure caught on fire it would have ignited the entire neighborhood through an explosion.

There was also illegal work done at the building without requisite permits, said the inspectors. There were several business operators at the site who were caught by surprise after inspectors locked down the building.

“I was renting this place,” said Tom Happle, owner of Happle Motorsports. He said he was paying Maalouf $2,100 for a garage and a lot that fits 20 vehicles.

Happle said he found the building through a Craigslist posting. A vehicle that was inside his rented garage remained inside. He managed to remove some of his cars that had plates on them, but three remained in the badly maintained open lot.

“As far as I knew he was taking care of the building,” said Happle. He said he presumed Maalouf had everything in the “up and up.”

“It’s a pretty big blow,” said Happle of the shutdown. “It sucks we weren’t told. I might be moving to Maywood.”

Maalouf’s property is 14,756 square feet, according to city records. Five inspectors from the city visited the site at 10:30 a.m., said officials.

“You can’t just come to our city and open up illegal businesses,” said Ruben Gomez, economic development director. “You can’t pick a building and do whatever you want.”

“We’re not blind. It’s a matter of time before we catch you,” said Balmer putting unscrupulous property owners on notice.

Contact information for Maalouf was unavailable on Thursday afternoon.