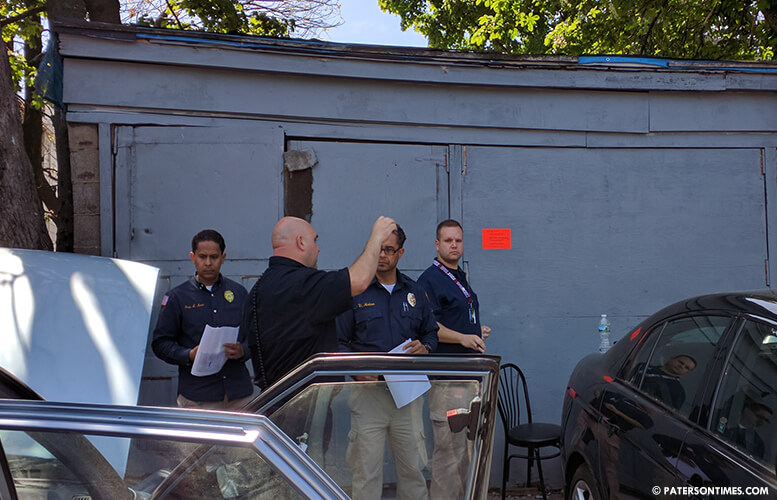 City inspectors busted three buildings on Montgomery Street operating without the necessary paperwork on Monday morning. In one site inspectors found a garage that had been split into an allegedly illegal car painting shop and an illegal living space.

Inspectors cited the building owner and shut down the illegal paint shop. Five inspectors from the city’s Community Improvement Division visited the buildings located at the dead end of Montgomery Street.

190-192 Montgomery Street, the building owned by Hawthorne-based Rt. 20 Realty Management, LLC., housed an auto mechanic shop on the bottom and an allegedly illegal nail salon on the top.

The city’s uniform construction code inspector conducted an on-site inspection to determine it was not necessary to lock down the auto repair shop operated out of the location. Inspectors told the auto mechanic shop at the site to quit using a makeshift cooking area that was being powered by a propane tank.

A fire inspector conducted an initial inspection of the site which will potentially result in fire violations.

198 Montgomery Street, also owned by Bjgm Realty, was the site of an illegal car painting business. The small garage also had a shabby living quarter with a bed. Two tractor trailers and about a dozen vehicles were scattered about an unpaved lot. Inspectors said parking vehicles on unpaved lot is a violation.

The UCC inspector placed a notice and shutdown the allegedly illegal paint shop at the location.

David Mendelsohn, owner of the two buildings belonging to Bjgm Realty, appeared surprised by the inspectors visit. “I don’t know why they came down,” he said on Monday morning.

The owner never obtained them. Business owners blamed the owner for failing to acquire the needed certificates.

Jarvis Valentin, who has owned the Mirror Finish, Car Wash, and Detailing for a decade at the location, said he attempted to obtain a CO for his building. He said he could not obtain the CO because he was not the owner of the building.

Valentin said he pays $550 in rent for his shop to Mendelsohn.

“A lot of the small business get screwed by property owners,” said inspector Tyree Balmer. He and other Community Improvement Division inspectors — Philip Cosentino, Andrew Melendez, Rodolfo Marte, and Victor Malave – issued a number of tickets to the buildings.

The city’s fire inspector is also expected to ticket some of the buildings.

While the inspectors were at the site at about 10:30 a.m., Mendelsohn appeared on the scene. He at one point left the scene to the city’s Community Improvement Division to obtain the necessary paperwork for his buildings.