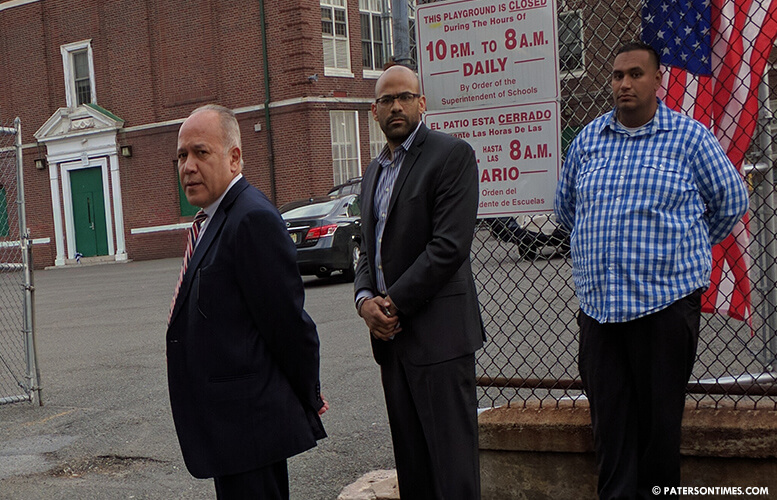 As voters arrived at School 25 to cast their ballots for one of the two men running for the 6th Ward council seat, mayor Jose “Joey” Torres greeted them at the parking lot gate of the school to urge residents to vote for his candidate: Al Abdelaziz.

Some voters rolled their windows down to return the mayor’s greeting while others ignored his urging and continued inside the parking lot of the school to head to the voting booth.

“Alaa has my vote,” a woman told Torres as he approached to lobby for Abdelaziz on the sidewalk. Then came a man and woman, who parked their Lexus close to the curb, and walked into the school.

Torres urged them to vote for Abdelaziz. The man and woman politely agreed with the mayor and continued to walk into the polling site.

“I voted for Sayegh because I know Sayegh,” said Fernando – who did not wish to share his last name — after he returned to his car.

The woman though did not disclose who she selected on the ballot. As Torres continued to approach voters, one individual called election officials to complain Torres was “intimidating” voters at the school’s parking lot entrance prompting a response from a sheriff’s officer and the municipal clerk.

There was also confusion as to whether Torres was 100-foot away from the polling place. It turned out, election officials measured the distance from the entrance of the polling site and placed a piece of white tape on the playground.

Torres reckoned he was more than sufficient distance away from the polling site. Torres wasn’t alone at the school.

“He’s a good guy. It would be very damaging to the city if he loses,” said Michael Symonds, a friend and supporter of Sayegh. He was holding a large Sayegh political sign signaling voters support the incumbent.

Sayegh also faced a roadblock earlier in the day when the city closed 20th Avenue cutting voters off from conveniently accessing School 24.

“Do we want the roads or not?” responded Torres when asked about the road closure. He said 20th Avenue was scheduled for resurfacing long prior to the election.

Torres brushed off any suggestions the road closure was a political move to punish Sayegh supporters in 6th Ward’s district 4 and 5. Public works director Manny Ojeda directed the city’s engineer to re-open the roads after being told candidates were complaining voters were being impeded from heading to the school to cast their ballots.