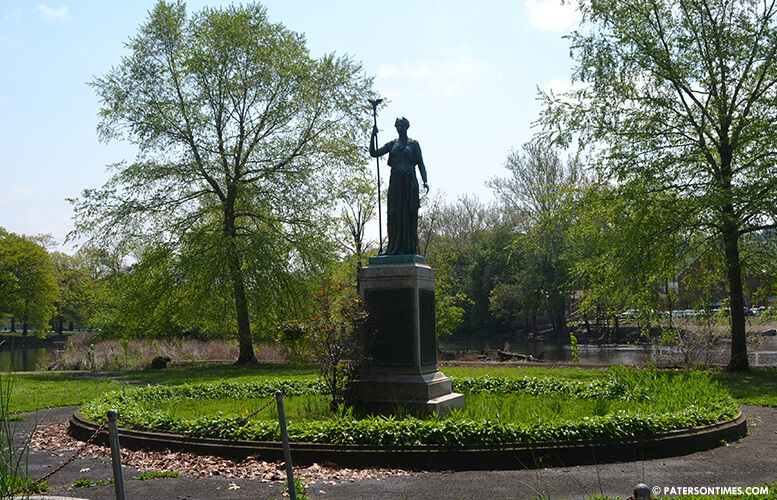 The Paterson Historic Preservation Society is raising funds to restore a neglected World War I monument in Westside Park.

“We’d like to restore the whole thing,” said David Cubby, a trustee of the society. He said he intends to bring a group of experts to determine what is needed to rehabilitate the statue of America, which was erected sometime after the European conflict that embroiled the United States in 1917.

The statue, a work by famed sculptor Gaetano Federici, was originally dedicated by neighborhood residents at a triangle on Union Avenue before it was moved to Westside Park in the 1940s where it was placed above a reflecting pool with a fountain.

“The ring around the statue used to be filled with water,” said Cubby.

Cubby said the move was prompted by traffic hazard that resulted from the statue being on Union Avenue. He said a survey was done in the 1990s to potentially restore the monument, but not much followed.

Cubby said the restoration work will include replacing the missing plate on the statue. He said there were four plates on the statue, but only three remain.

Cubby also wants to see the decrepit benches around the statue replaced.

The neglect of the monument is apparent with overgrown weed and grass. “There’s a lot of overgrowth in the area where it shouldn’t be,” said Cubby. “We’re trying to give a general facelift to the area. A nice little area for people to come to enjoy the park.”

Cubby said he is in conversation with the city government to gather partners to obtain grant funds to restore the monument which in the past has been the target thieves.

The New Jersey Community Development Corporation (NJCDC) is putting together a master plan for the park which will attract grant funds and donations to see the jewel of the Hillcrest section revitalized.

Play a part in restoring the Westside Park monument by donating to the Paterson Historic Preservation Society. Email: [email protected]