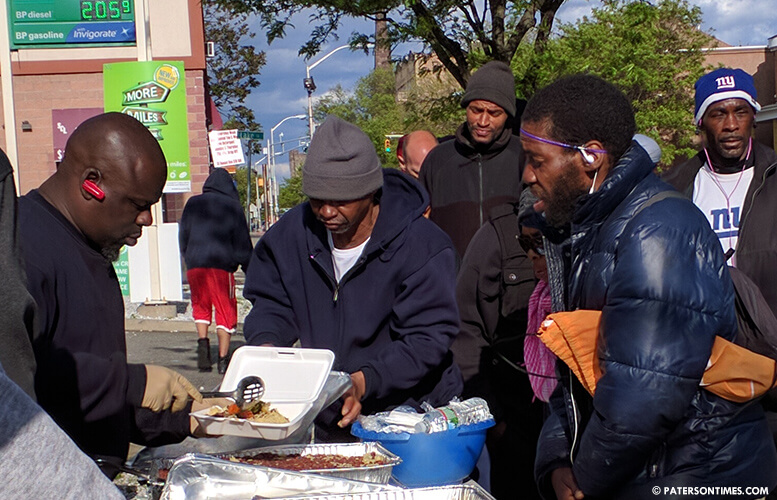 On any given Sunday Akbar McEntyre and a small group of volunteers arrange a series of folding tables spread with steam pans filled with freshly cooked viands outside of the BP Gas Station on Broadway to serve hearty family meals to the needy.

“Sunday the kitchen used to be overwhelmed with flavors,” said Tommy Kellam, 53, a volunteer at the nonprofit Humble Beginnings Incorporated, last Sunday.

Kellam said the Sunday dinner brought together families as few people lined up on the sidewalk waiting for the group to unload the food from a worn out van for distribution.

“Ya bout to do some food?” asked a mangy dressed woman. “What ya cook today?” Rice, red kidney beans, cooked broccoli and carrots, and quarter chickens were for dinner today.

“There’s always a salad,” pointed out McEntyre, 49, a social worker. “Nutrition is important.” He said the group ensures the food being served is fresh and has high nutritional value.

McEntyre said much of the food is purchased through money raised from donations. He said at times he uses money from his own pocket to purchase materials needed to make the distribution possible.

McEntyre said his organization receives bread donations from Panera Bread which helps to further the program.

600 meals were expected to be served for the day. By 5 p.m. more than 30 people filled the sidewalk in an orderly fashion.

“The food is delicious,” said Clarence Wright, 55, who said he is a regular. He said in the past the group served sandwiches and fish.

McEntyre said the week prior the group served catfish meals to the mostly homeless, mentally ill, and drug addicted.

Wright loathed to admit he was homeless. His tattered — a ripped pair of jeans and scruffy sweater – clothing betrayed his answer.

McEntyre said the group serves everyone in a “non-judgmental” fashion. He said sometimes there are families who get on the line for their Sunday meals. Indeed, there were some who stopped by in vehicles to obtain a foam hinged container packed with a hearty meal.

Some look forward to the group’s Sunday meals. “When they look at us they see hope,” said McEntyre. “Sunday dinner restores human dignity.”

McEntyre said the organization began serving the family meals last May. He said this year marks an anniversary for the organization. He said his organization is associated with the Muslims Against Hunger Project, whose aim is to raise awareness about hunger, poverty, and homelessness while taking steps to alleviate its effects.

“He is concerned about the community. He grew up in Paterson,” said Mustafa Coleman, a Hackensack resident, who helps the group distribute meals, speaking about McEntyre.

We’re out here sleet, snow, or rain, added Kellam. The group battled the unusual May wind and chill on Sunday as it distributed meals into the night. “Wind don’t matter,” he said.

McEntyre said the group has also begun handing out meals during the weekdays while strengthening its mainstay Sunday meal. His group is part of a crop of local organizations, which includes Paterson Cares, whose aim has been to bring social services directly to the needy rather than to wait on the destitute to seek them out.

“These people rely on us,” said McEntyre as the line of people extended to the very end of the city block.