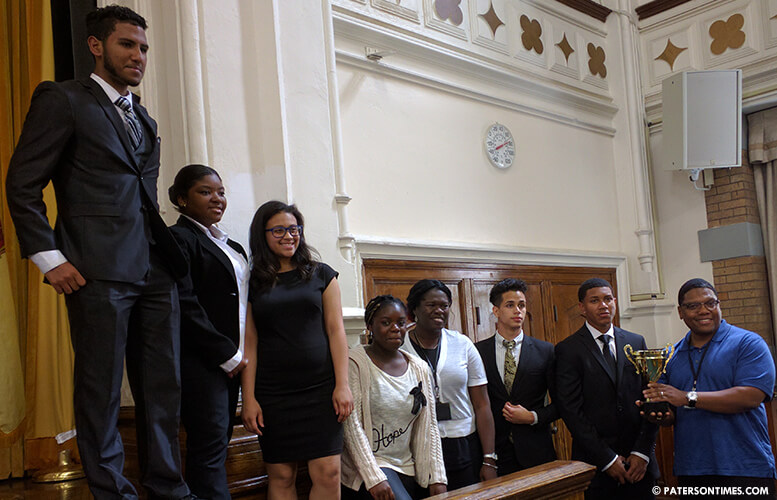 Four-person teams from both schools debated the positives and negatives of the proposition “That assimilation of immigrant groups towards a homogenous culture is beneficial for the development and growth of a society” at the district’s fifth annual Lincoln-Douglas Debate Tournament.

The Kennedy team which was affirmatively defending the proposition argued assimilation of immigrant groups strengthen society and increase productivity.

Roberto Collado cited examples from history to prove his team’s points. He pointed to Alexander the Great’s policy of assimilation. He said the Macedonian king incorporated the various ethnic groups he conquered by encouraging them to assimilate to Greek ways.

“Whenever he would conquer a city or town he would teach them Greek culture,” said Collado (pictured, 3rd from right). He also mentioned Genghis Khan and his policy of ensuring conquered peoples behaved in accordance with the rules of the Mongolian steppes.

“They allowed them to continue to worship their God,” said Collado of Nebuchadnezzar’s policy towards the Jews in Palestine.

Collado’s team defined assimilation as adapting to a new culture without giving up one’s own. The unstated point in Collado’s examples are that these empires became successes because of their policies of assimilating foreigners.

The Panther team which was given the negative position argued assimilation is not happening and immigration creates greater burden on society at least in the example of the United States.

Tyrese Coleman argued too many immigrants are using social services. Too many of them are unskilled to make society more productive. And immigration creates disorder. The majority of immigrants to the United States are unskilled laborers, argued Coleman.

“An American solider goes out, risks his life for this country, faces death. When that solider comes back he can’t find a job because an uneducated, unskilled laborer came by whatever process and took his job,” argued Felix De Dios of the Panther team.

“Immigrants are using too many social services,” said De Dios. “Look at here in Paterson. How many people are on welfare?”

This higher usage rate leads to larger taxes on the native population, argued the Panther team.

The team also cited that 43 of the 76 most wanted murderers in the FBI’s most wanted list are foreign born, according to the same conservative research outfit.

“Immigration has become too much of a burden,” said De Dios. He said many gather around themselves rather than assimilate into the broader society. Some are quick to pick up drug dealing and life of crime on the street, he said.

“Your argument is fallacious,” retorted Francesca Quinonez of the Kennedy team. She said De Dios was utilizing argumentum ad consequentiam, appeal to consequences, to make his points.

“What’s happening is it’s not,” said De Dios. He said in Paterson most ethnic groups have curved out their own ethnic enclaves rather than assimilating into the broader society. He stated some are also adding to the social problems of the city by taking up street behavior – he cited the drug trade on Market Street.

“If they are conforming to what Paterson is showing them in crime and poverty are they not assimilating?” asked Quinonez. “So in a way they are assimilating? Don’t you agree?”

“They are assimilating to crime,” said De Dios contradicting himself.

A three-person panel of former city students gave the victory to to the School of Business, Technology, Marketing, and Finance (BTMF) at John F. Kennedy High School.

“We did well for our first time. We take this as a lesson. We’ll get better from it,” said Coleman after his team lost the competition.

The district has 13 high school debate teams. 9 of them competed in the tournament at the Eastside High School auditorium.

“You have learned a life skill,” said district spokeswoman Terry Corallo representing state-appointed district superintendent Donnie Evans to 100 or so students at the auditorium. “When you go off to college — I said when not if — this is the type of information your professors will be looking for. They want you to prove your point.”

“They were lacking a lot of logical arguments. They forgot to research,” said Collado.

The Kennedy team spent two weeks to prepare for the competition, according to history teacher Merlyn Denny. They learned to speak before a large audience, to argue coherently, and make points without issuing personal attacks.

“You don’t have to use profanity,” said Nylaisa Frierson (2nd from left) of the Kennedy team when asked what she learned from the experience.

Mike Ollo, vice-principal of the School of Government and Public Administration at Eastside High School, who coordinated the debate competition, said the presidential candidates can learn a thing or two from the students.

“I saw a great dialogue on the table,” said Ollo to the students.

“We live in a democracy. This is a key skill,” said history teacher Denny.