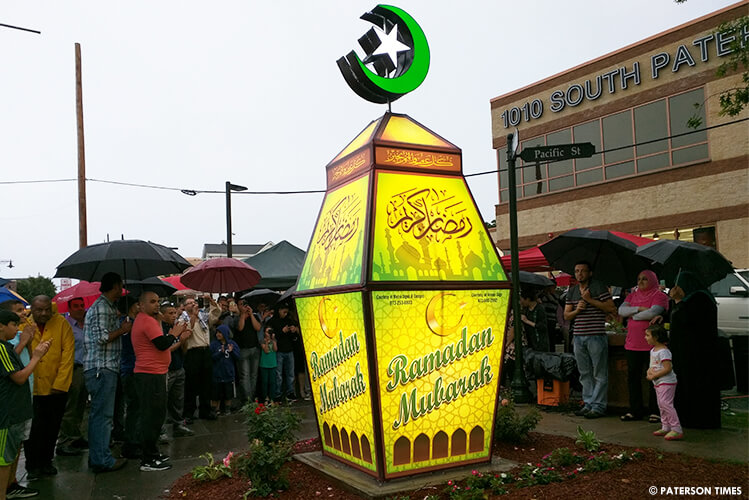 The city’s Muslim community ushered in the holy month of Ramadan with a lantern lighting that attracted more than 150 people in the soaking rain on Sunday evening at a small park in South Paterson.

Local leaders and members of the Muslim community stood at the park in the corner of Main Street and Gould Avenue under tents and umbrellas as the massive lantern known in Arabic as fanous or fanoos was lit up with the text “Ramadan Mubarak.”

Ramadan, a month of fasting from dawn until dusk for more than 1.6 billion Muslims worldwide, began on Sunday evening.

“This is a very historical moment because this is the first of an annual tradition,” said mayor Jose “Joey” Torres. He wants to turn it into an annual happening for the city’s estimated 25,000 to 30,000 Muslims.

“This is something the city never did before,” said Al Abdelaziz, who emerged as a dynamic young leader in the recent municipal election in the 6th Ward. He mentioned the banners celebrating the holy month that have been put up on utility poles on Main Street.

The city installs utility pole banners in December on Market Street and 21st Avenue celebrating Christmas. Abdelaziz said he hopes this is something that is done every year.

Every year Muslims spend the ninth month of the Islamic calendar in fasting, prayer, and giving in charity.

“It is one of the pillars of Islam,” said imam Mohammad Qatanani of the Islamic Center of Passaic County (ICPC), speaking about fasting in Ramadan. He noted the other four pillars belief in one God, daily prayer, alms giving, and pilgrimage to Mecca.

“To fast is to come closer to God,” said Qatanani.

The celebration drew a large number of families among them children. 10-year-old Mairiam Diab, who was there with her mother, said she will be fasting beginning tomorrow.

Diab, a School 9 student, said she has grown accustomed to it. “I did it last year,” she said.

Ammar said he is prepared having fasted since the age of seven.

Diab’s mother Raeda Ghinm said getting children fasting early on acclimates them to an important pillar of the Islamic faith. “So they know when they get older,” she said in Arabic and Diab translated to English.

“We try to raise our children to love God, to worship Him, and to come close to Him. It is very important to control their desires,” said the imam.

The event also attracted Walid “Willy” Sirhan all the way from the Chicago metro area. “It’s a historic moment,” he said.

Sirhan said he didn’t want to miss the historic event. He said the event naturally followed the great growth of the Muslim community in Paterson.

Andre Sayegh, 6th Ward councilman, said the South Paterson Business Association met a month ago to organize the event. He said the mayor and others quickly joined in. Garfield-based Metro Signs & Designs contributed the fanoos, the large lantern, according to organizers.

The city’s Division of Multi-Cultural and Community Affairs funded 45 utility pole banners for $2,700 for the occasion, said Marcia Julian-Sottorrio, who heads the division.

“I love this. It’s a great thing. We’re making so much progress,” said Mohammed Akhtaruzzaman, 2nd Ward councilman, who attended the event.

That progress though has been under attack by presumptive Republican Party presidential nominee Donald Trump who proposed to ban Muslims from entering the United States.

“Let him come to Paterson where we give children off for Eid,” said Sayegh challenging Trump to visit the Silk City. The councilman held a moment of silence for legendary boxer Muhammad Ali who passed away on Friday.

“Ali was a fighter for what was right. He was an excellent ambassador for Islam. Today, we can use more ambassadors for Islam,” said Sayegh.

The Ramadan lantern lighting in South Paterson is expected to be an annual event in the city. “This is something we want to continue for South Paterson,” said Abdelaziz, who started fasting at age six.