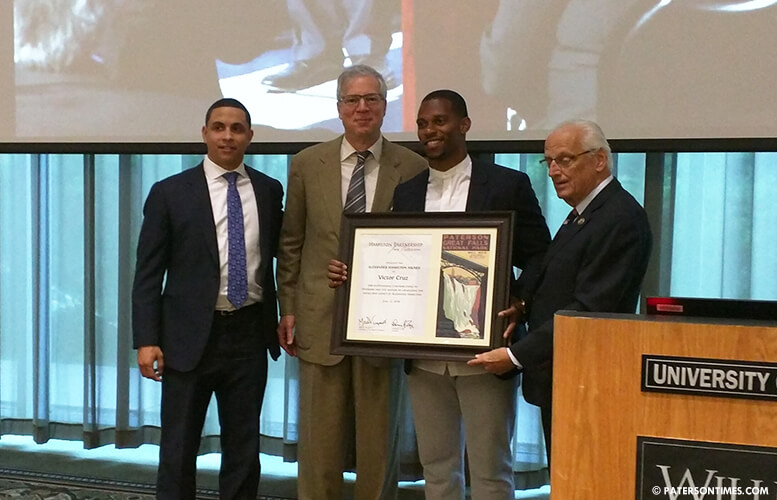 City native Victor Cruz was honored at the Hamilton Partnership for Paterson fundraiser on Sunday night for his “off the field work” inspiring young people to take an interest in science and technology.

“Everyone outside of Paterson knows Victor as an NFL Super Bowl champ who played for the champion Giants. That’s pretty good,” said Rep. Bill Pascrell, who served as the master of ceremonies at the fundraiser.

What’s less known is the work Cruz does in getting young people in the Silk City interested in science and technology through a Science, Technology, Engineering and Math (STEM) program he supports via the Victor Cruz Foundation at the Paterson Boys and Girls Club.

“We’re here today to recognize the work you’ve done off the field,” said Pascrell. He praised the New York Giants wide receiver for giving back to his community.

“I want to give kids resources to fulfill their dreams, fulfill their goals and everything they want to do in their lives,” said Cruz. “I pray the STEM program provides the small pieces of the puzzle to get kids to achieve their dreams.”

Cruz said the STEM program idea struck him while he was on a tour of the White House. He said he saw young children, 10 and 11 years old, inventing things with the potential to change the world.

He said he thought of bringing the program to Paterson and did. “If I had those resources as a kid who knows what I could have done,” he thought out loud at the ceremony as he accepted the Alexander Hamilton Award from the partnership.

Leonard Zax, president of the Hamilton Partnership for Paterson, said Cruz donated items from his personal collection for a silent auction held at the event to benefit the Great Falls National Park. He donated autographed copies of his book, footballs, helmet, and a jersey.

Two dozen or so items including tickets to the Daily Show, a Cruz jersey, signed Hamilton biography by Ron Chernow, and other items were auctioned off at the event attended by more than 150 people.

A tally of the amount raised through the auction is yet unavailable.

The biggest items, two prime tickets to the Tony Award-winning “Hamilton,” which tells the story of Paterson’s founder Alexander Hamilton, are being auctioned off via eBay.