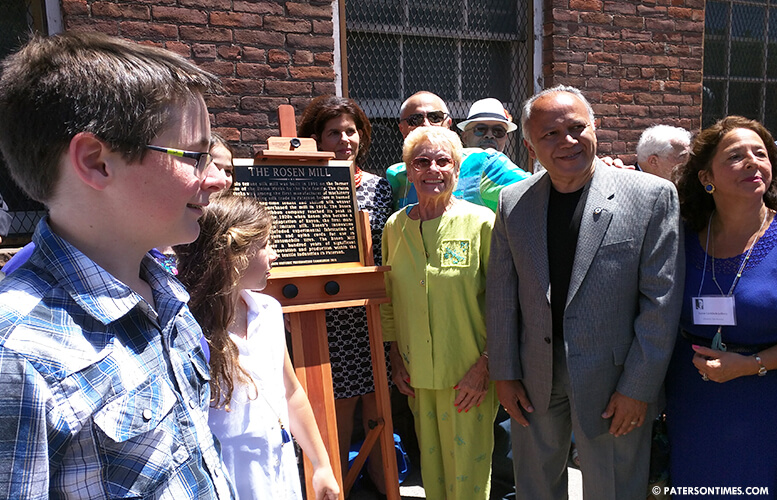 Roy Rosen traveled from Los Angeles to Paterson for the unveiling of a historic marker celebrating a legacy of innovation that was spearheaded by his great-uncle Jacob Rosen at the Rosen Mill in the corner of Spruce and Market Streets.

Roy Rosen, 86, was not alone. In all, 48 members of the Rosen family, from all over the United States, came together for Sunday afternoon’s historic marker ceremony put on by the Paterson Historic Preservation Commission.

“Nobody lives in Paterson anymore,” lamented Nancy Lieblich Garson — the great granddaughter of Jacob Rosen — who traveled from Washington D.C. “When you’re not in the environment, it’s always hard to remember.”

The historic marker unveiling jogged the memory of five generations of Rosens. Her great grandfather owned and operated the mill building in the corner of Spruce and Market Streets to produce silk ribbons from 1916 until late 1930s. He pioneered the use of rayon, a man-made textile that imitates silk. His innovative efforts include experimental fabrication of nylon-woven yarn and nylon cord to strengthen automobile tires.

In the 1920s, the Rosen family mill produced more silk ribbons than any other mill in the county employing over 1,000 workers. Working in the mills wasn’t easy for workers.

“I worked there, but I didn’t like it,” recalled Roy Rosen, whose father Louis Rosen had a mill on River Street, where the former worked in the 1940s. “It was awful.”

The mill as it stands today at 1 Market Street was erected in circa 1891 as a tenant silk mill. It was built by a group which included William Beggs and William Ryle, son of John Ryle, who is known as the “Father of the Silk Industry.”

Prior to that the site was occupied by the Union Works, a foundry and machine shop, which was destroyed by a fire. In 1858, general Thomas D. Hoxsey developed a cotton factory on the site. Silk production was introduced in the 1860s and continued until the mill burned in 1890.

After the new building was constructed, from 1891 to 1916 it was leased and operated by a number of entities to produce silk ribbons and products. The Rosens, in need of space for expansion, purchased the building in 1916.

The Rosens opened their first factory at 35 Fair Street. It was later moved to 17 Paterson Street as the growing business required more space. The family opened mills in Pennsylvania as well. The need for further expansion forced them to purchased the mill at the former Union Works site.

Jacob Rosen also played an active philanthropic and civic role in his adopted city. He served as a cantor at the Barnert Temple for 20 years and president for 10 years from 1923-33. He was also one of the original supporter of the Barnert Hospital on Broadway. His son Max Rosen played a pivotal role in the establishment of the hospital as an important funder and first president of the board of directors, according to the Paterson Historic Preservation Commission.

Garson said the Rosens – Jacob Rosen and Simon Rosen – arrived in New York from Lodz, Poland in 1880. Jacob Rosen, born in 1863, was 17. His younger brother Simon Rosen was 14. Both teenagers were experienced silk weavers.

Jacob Rosen arrived in Paterson in 1890 with his wife and growing family to find great opportunities in the silk business.

“It’s been a revolving door. As the Jewish community moved on other communities settled,” said mayor Jose “Joey” Torres comparing the Rosens arrival to those of countless immigrants who for centuries have come to the Silk City looking for opportunities.

Jacob Rosen and his son Max Rosen quickly opened the J. Rosen and Son business in 1905. Garson said the Rosens worked hard to ensure a better life for future generations.

“You need to remember this story and tell your children and your grandchildren,” said Garson, exhorting the young Rosens, who attended the unveiling. Indeed, she brought the family together for Sunday’s event. She grew up in Paterson and was familiar with her family’s history.

She attended School 26 and left the city after college. Her parents sold their Ridge Terrace home in 1975 and relocated elsewhere, she said.
Garson, who said the plaque unveiled was donated by her family, presently serves on the board of the Hamilton Partnership for Paterson, an organization playing a critical role in shaping the Great Falls National Park.

“It’s just great to remember the historic significance of the mill and what it brought to Paterson,” said Jordon Rosen, the great-great-grandson of Jacob Rosen, who resides in Wood-Ridge. “It’s great to bring all the Rosens to basically commemorate everything that happened here.”