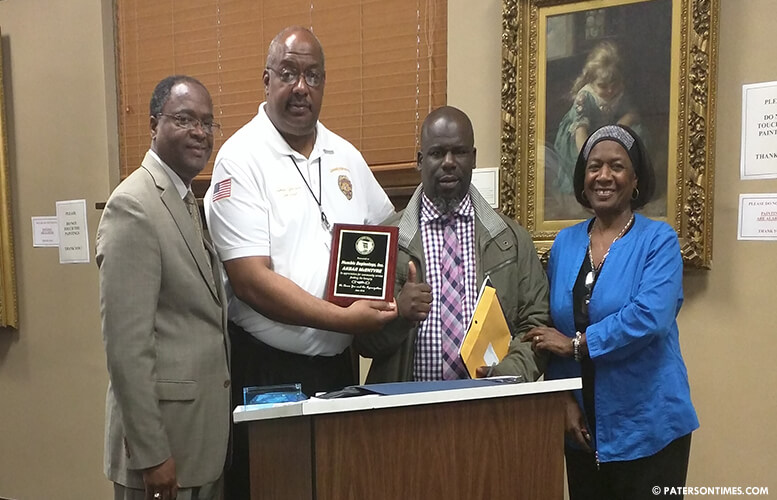 The almost six-year-old activism group Let’s Save Paterson recognized two city residents for their efforts in improving the Silk City during an award ceremony on Monday night at the Danforth Memorial Library.

McEntyre received the Community Service Award for serving 30,000 meals to some of the neediest individuals in the city through his nonprofit organization Humble Beginnings Inc. His group is on the corner of Broadway and Summer Street every Sunday giving out a hearty family meal to the homeless, the drug addicted, and the mentally ill.

“It’s my responsibility to feed my community because to feed your community is the equivalent of feeding your family,” said McEntyre as he was handed a plaque for his work in feeding the hungry. “There was, once upon a time, a value system where to ensure the safety and well-being of the community you had to make sure every neighbor in the community received the basic resources.”

The activism group awarded Oquendo the Louis Gilmore Award named after David Gilmore’s deceased brother. Gilmore said the award is given out to courageous straight-talkers whose frankness and honesty improves public discourse.

Oquendo has been an outspoken critic of cuts in the city’s education system. “She goes to the Board of Education meetings and gives them hell,” said Gilmore. “She tells it like it is. Some of us will like it, some of us won’t.”

Gilmore also mentioned an incident when she shooed a group of drug dealers and addicts on Hamilton Avenue. Oquendo received threats against her life as a result of the incident which failed to deter her work.

She put her life on the line for her neighborhood, said Gilmore. He said the awards are not given out lightly. In the past nearly six years, the activist said he gave out just three awards.

Gilmore founded the group Let’s Save Paterson as a Facebook page in 2010. Over the years his group has had a patent impact on city government and the community.

The group is one of the largest Paterson pages on the social networking website followed by city leaders and residents alike.

“I’m tired of turning a blind eye. If I’m not part of the solution, I’m part of the problem,” said Oquendo.