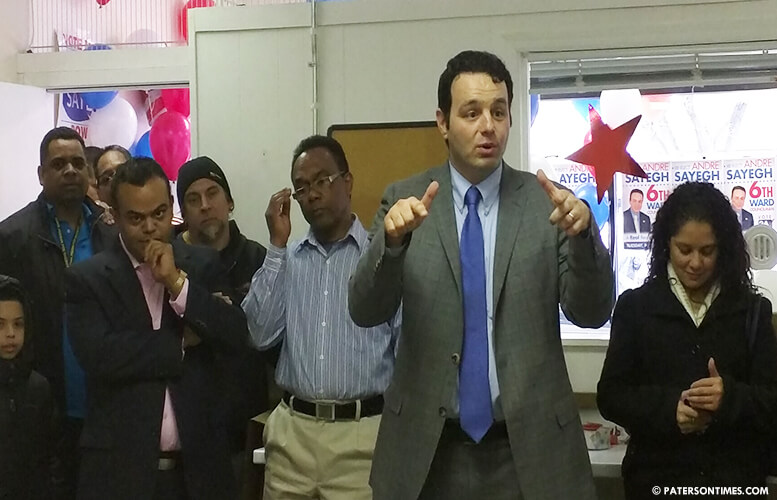 The New Jersey Election Law Enforcement Commission (ELEC) is investigating councilman Andre Sayegh’s campaign finance reports from the past three elections, according to a letter provided by a source to the Paterson Times.

The letter which is dated June 15th, 2016 and was received by several individuals, who complained about alleged irregularities with Sayegh’s campaign finance reports going back eight years, states the commission opened an investigation into the councilman’s filings from 2012, 2014, and 2016 elections.

“This is the first time I’ve heard of any type of an investigation,” said Sayegh on Monday morning. His campaign finance report issue first surfaced during the recent municipal elections in which his opponent Al Abdelaziz hammered him for filing incomplete reports for almost a decade.

Sayegh’s report did not contain donor occupations and left out employer names in numerous instances. Those reports were amended and resubmitted to the commission, he said.

“This is news to me,” said Abdelaziz. “The election is over and I look forward to continue working with Andre to move the 6th Ward forward.”

Sayegh said the letter could be just a belated response from the various complaints that were submitted leading up to the May 15th, 2016 election.

“I can’t confirm or deny it,” said Joe Donohue‚ deputy director of the New Jersey Election Law Enforcement Commission, when asked about the investigation referenced in the letter.

State officials said both the complainant and the subject of the investigation receive phone calls or letters informing them about investigations. Sayegh said he has not received any letter or phone call from the commission as of late Monday afternoon.

The councilman said he received a letter from the commission two weeks ago requiring him to add employer information for several donors that were missing on his 20-day post-election campaign finance report.

“We submitted everything. If they need more, we can give them more,” said Sayegh. “We’ve complied with what they wanted. We’ve gotten everything in on time.”