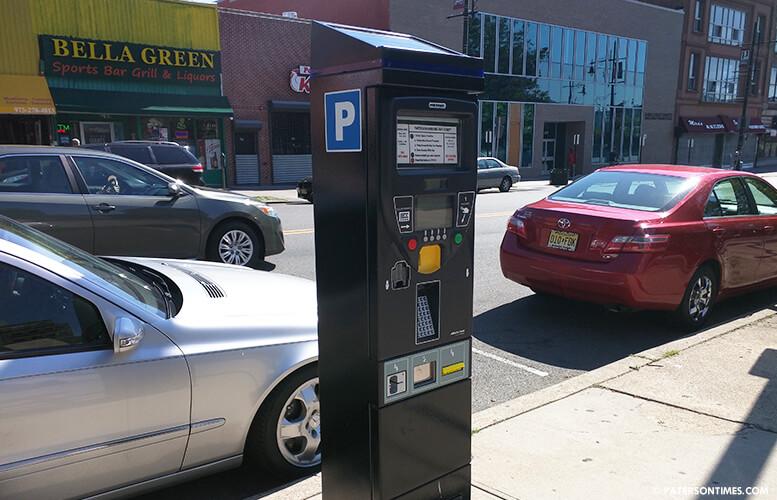 Tony Perez, executive director of the Paterson Parking Authority, said the authority intends to test run two different machines before settling on one. He said for 90-days the authority will trial run machines from Roseville, Minnesota-based Amano McGann and Parsippany-based ITS.

Two machines from Amano McGann were installed in early June on Market Street between Colt and Church Streets. “Right now, we just have them placed, so people can get used to seeing them,” said Perez on Tuesday afternoon.

Perez said the machines, which come equipped with solar panels, have to be programmed to a software before they can be used by customers. He said he expects the machines to come online before the end of this month.

The Parsippany-based vendor’s machine has yet to be installed on the street.

The smart machines costs from $10,000 to $12,000 compared to $600 for the basic coin operated machines presently deployed throughout the city. However, unlike the antiquated machines, the new meters will be able to control multiple parking spaces.

“Each machine can hold up as many spaces as you want,” said Perez. For example, a city block typically has 10 parking spots on each side. Two machines can handle the 20 parking spaces.

“You don’t want to make customers walk that much. If it’s a big block we may have to put two,” he said.

The authority has yet to determine the number of machines it will purchase. Perez said he is hoping to have the smart machines, which ever one of the two the authority settles on, deployed in the downtown business area by August of this year.

Perez explained motorists will purchase parking hours at the kiosk and be provided with a slip to display on their windshield.

The authority will collect feedback from customers during the 90-day trial run of the machines.

“We’ve been looking at these things for many years just trying to find the right machines and I think we have. The two machines we’re looking at now, either one will meet our needs,” said Perez.

The director said there is no monthly subscription cost or revenue splitting with either of the two companies. He said there’s the initial cost to purchase the machines, warranty, and a service contract.

Perez noted the smart meters come equipped with a self-diagnostic program. He said the authority will receive notifications when a machine is not working properly or is offline. When a single machine goes offline, the authority risks losing revenue for an entire block.

The authority will have to keep replacement machines to protect against meter vandalism, outage, and malfunction.

In early April, Teague complained about the antiquated parking meters in the city. He particularly carped about running around with a dollar bill to obtain four quarters in order to park at a meter.

“All we want to do is make the parking experience more pleasant by giving all these different options to pay,” said Perez.