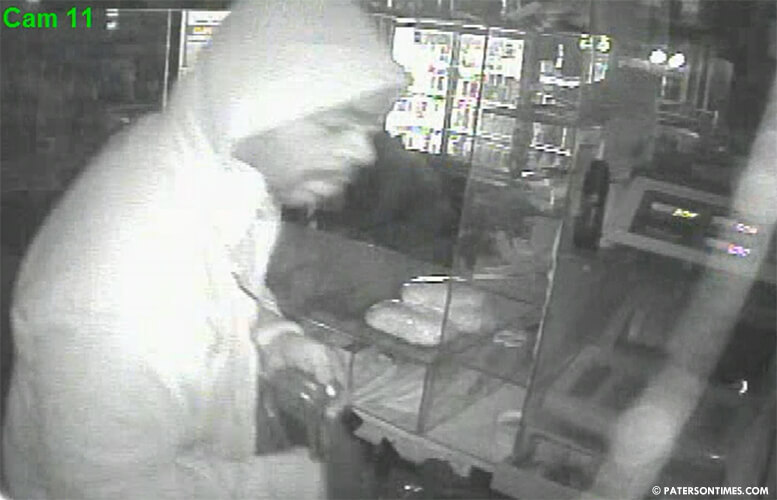 Police said Ryan Rouse, 48, of Arch Street, and Ronald Rouse, 52, of 10th Avenue were caught on surveillance as the two city men targeted Batista Grocery and Deli on Grand Street for the second time at about 3 a.m. on May 30th, 2016.

Police gathered surveillance from the first burglary which occurred on April 27th, 2016 at about 1:30 a.m. Surveillance footage shows the duo breaking the lock and entering the storefront at 256 Grand Street. They pushed in a plastic window after which one of them broke the ATM machine while the other walked behind the cash register for money and cigarettes.

The suspect, who went behind the counter to secure cash and cigarettes, did not have a mask on. He was captured on the store’s surveillance camera.

Detectives Kelvin Matos and Ed DelValle gathered surveillance footage from the area and determined the duo parked a Ford Taurus wagon in front of the business prior to committing the burglary.

The same vehicle was parked in front of the business during the second burglary. The two men targeted four businesses, according to police. Besides the Grand Stret grocery store, the duo also burglarized Allen Wine and Liquor on McBride Avenue and attempted to burglarize K&J Grocery on Broadway.

Police said the two men were not able to gain entry to the Broadway store. They took $9,750 in cash from ATMs and cash registers during the burglaries. The two also took $2,500 in lottery scratch off tickets from the McBride Avenue liquor store on June 10th, 2016. $150 worth of cigarettes were taken the Grand Street business on May 30th, 2016.

Both have been charged with numerous burglary charges.

“The investigation and those involved were tenacious in bringing this to a close,” said Speziale. “I am proud of the hard work and dedication displayed by the men and women involved in this investigation.”