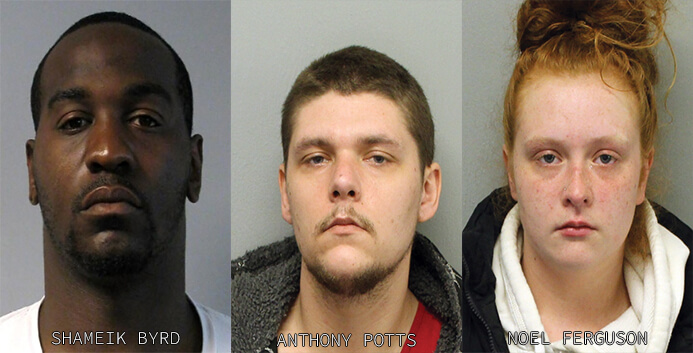 Two men and a woman have been charged with the heroin overdose death of a Warwick, New York man, according to the New Jersey Attorney General’s Office.

Shameik Byrd, 26, of Paterson; Anthony Potts, 27, of Warwick, NY; and Ferguson, 20, of Warwick, NY were arrested on charges of strict liability for drug-induced death for allegedly selling heroin that claimed the life of a Warwick man.

Kean Cabral, 25, was found dead inside his home on the morning of April 3, 2016 from a heroin overdose, authorities said.

Authorities allege Byrd aka “Homeboy,” Potts, and Ferguson played a role in Cabral’s death by selling the heroin that claimed his life.

Potts and his girlfriend Ferguson have been traveling to Paterson to purchase heroin. They sold the heroin stamped “Trap Queen” to Cabral.

Authorities setup surveillance outside of East 34th Street in Paterson on April 6, 2016 as part of the investigation capturing the couple obtaining heroin in a hand-to-hand drug transaction. 50 glassines of heroin stamped “Trap Queen” were seized from the couple. Potts and Ferguson sold multiple glassine envelopes of heroin to Cabral on the first and second day of April.

Potts and Ferguson identified Byrd as their dealer, authorities said.

Byrd was arrested on June 2, 2016 while Potts and Ferguson were arrested on Tuesday evening at their home.

Potts, his girlfriend Ferguson, and Byrd could face 10 to 20 years in state prison for the first-degree charge.

“We’ll continue to work collaboratively with our law enforcement partners in New York and elsewhere to enforce New Jersey’s strict liability law to hold drug dealers accountable for the effects of the deadly narcotics they sell,” Acting New Jersey Attorney General Christopher Porrino said. “Drug dealers who choose to profit by fueling the epidemic of opiate addiction will pay the price when that addiction turns deadly, as it does so often.”

“Heroin trafficking doesn’t stop at state borders, so law enforcement agencies must collaborate across state lines to protect their communities from the scourge of addiction,” New York State Attorney General Eric T. Schneiderman said. “If you deal death in our communities, we will come after you with the full force of the law.”

Potts and Ferguson are being held in Orange County pending extradition to New Jersey. Byrd is being housed at the Passaic County on $150,000 bail.