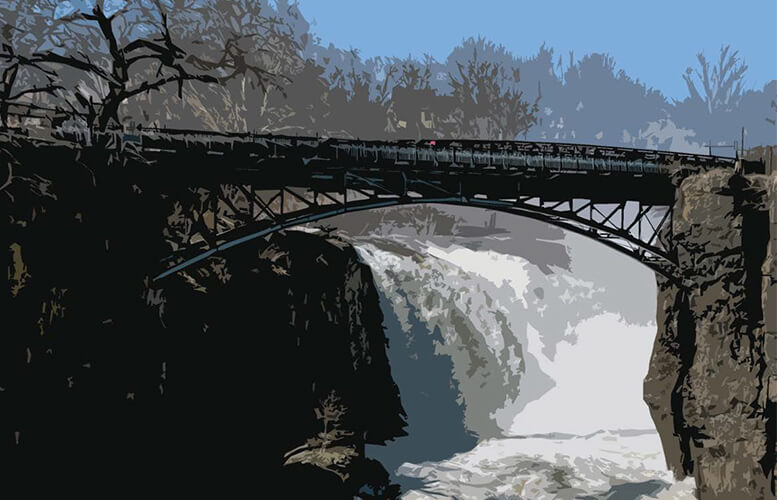 The Passaic County government has completed a traffic study of the area around the Great Falls National Park to improve pedestrian safety and reduce traffic congestion by re-making the Wayne Avenue and Spruce Street corridor as an urban boulevard and changing traffic flow on nearby roadways.

The study also calls for crosswalks at all approaches to the four-lane bridge. It also recommends converting Front Street from Paterson Avenue to Wayne Avenue into a one-way. The conversion would allow for parking spaces on Front Street.

With Front Street turned into a one-way towards the bridge, the left turn from Wayne Avenue can be eliminated to improve pedestrian mobility, according to the study. Changes to the Wayne Avenue bridge can be implemented when the county replaces the deck of the functionally obsolete bridge.

The study calls for significant changes to the flow of traffic within the Great Falls Historic District and the Downtown Commercial Historic District. For instance, the study recommends both Cianci and Mill Streets be turned into two-way streets.

Similarly, it recommends College Boulevard and Ellison Street – both presently one-way streets – to be turned into two-way streets.

The conversions would improve the traffic congestion within the district, according to the study, while making the streets safer for pedestrians. It also calls for traffic signals at the intersection of Spruce and Oliver Streets; and Ward and Cianci Streets.

“Channelized turns conflict with heavy pedestrian demand,” reads the 76 page study. Indeed, the opening of a supermarket on Main Street and Memorial Drive has increased foot traffic in the area.

The channeled turn islands would be replaced with sidewalk extensions.

Much of the study is focused on making the historic districts safer for foot traffic and bikes. The study calls for bike lanes throughout the area around the Great Falls National Park. It recommends creating bike lanes on both sides of Market Street.

“Install dedicated bicycle lanes where feasible and green back sharrows where roadway widths are constrained,” recommends the study.

The Environmental Protection Agency’s (EPA) Office of Sustainable Communities (OSC) has provided the county with a grant to conduct a feasibility study for a bike share program in the Silk City.

Keith Furlong, spokesman for the Passaic County government, suggested the recommendations of the study will be implemented in a piecemeal manner.

“There is no set implementation schedule. As grant application and other partnership opportunities arise, the plan will be used as a blueprint to guide design and leverage investments together,” said Furlong on Wednesday. “The recommendations of the study are already being implemented in various efforts already underway.”

Furlong said the design and reconstruction of the Wayne Avenue bridge later this year will incorporate recommendations from the study. He said the county is applying for various grants to install a new traffic signal on Oliver and Spruce Streets and new sidewalks at various parts of Spruce Street.

Many of the changes recommended in the study are adjustments to municipal roads. Furlong said the county worked with the city’s engineering division to collect existing road condition data.

“Any changes that are proposed to the City roadways have been shared and there will continue to be a need to coordinate on how to best move forward with proposed changes,” said Furlong.

Furlong said the study was prompted by a previous county study connected to its 2014 master plan which uncovered deficiencies in the transportation system including auto-oriented roadways (the study calls for complete streets), poor pedestrian amenities, and the impact of Route 80 and 19 highway ramps which would potentially hinder heritage tourism.

“These conditions were identified as major issues for the National Parks Service which prompted a more detailed study to alleviate these conditions,” said Furlong.