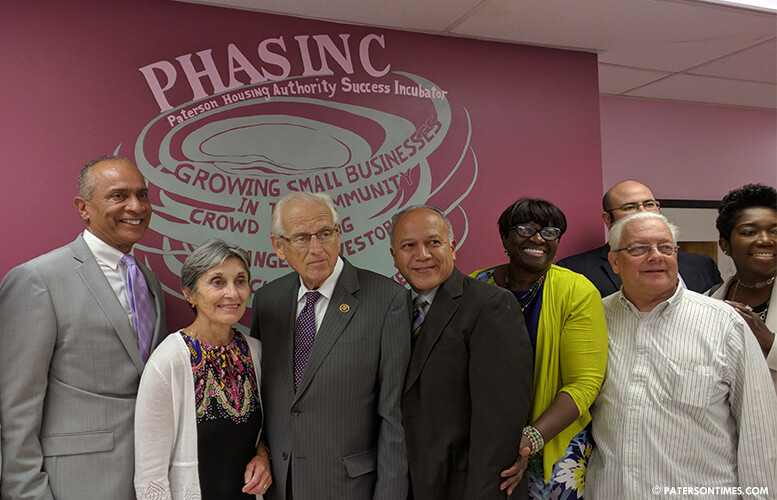 Vernell Smith dreamed up a plan to own an extermination company in 2008. Her company did not begin to take off until after she went through the Paterson Housing Authority’s 11-week entrepreneurship certificate program.

Smith earned her certificate in April. Now, her company, Grace and Mercy Exterminating, has one additional employee beside herself and she has successfully secured a government contract.

“It really educated me,” said Smith, who underwent training at the Christopher Hope Center on Temple Street. “They taught me about the breakeven process, taxes, and contracting.” She said the instructors at the program educated her on crafting proposals and submitting bids to obtain government contracts for her company.

Armed with that knowledge, Smith was able to secure an extermination contract from the Paterson Housing Authority.

“We’re adding to the expansion and growth of Paterson,” said Gorham. “What’s better than owning your own business? In Paterson our end goal is prosperity.” Her organization is spending about $150,000 for the entrepreneurship program.

The program is targeted towards low-income residents living in public housing developments through Section 3, a compliance policy that requires 30-percent of the U.S. Department of Housing and Urban Development (HUD) funded projects go towards providing employment for low-income residents.

June Bryant of the Paterson Housing Authority came up with the incubator idea to address unemployment problem after a HUD project ends. “After the project ends you have folks who are ill prepared for jobs,” she said. “We want to get folks to be self-sustainable.”

Bryant said the program began 13 months ago. It has graduated 27 entrepreneurs so far. 7 of those graduates are being provided office space for the start-up businesses at the Ward Street building for $150 per month.

“We cannot survive as a city if our people don’t go to work,” said Rep. Bill Pascrell, who praised Gorham for taking steps to build small businesses and employment through the program. “Small businesses are the life blood of Paterson, New Jersey.”

“It’s one thing to have an apartment another to sustain it,” he said. “This is a great beginning for Paterson.”

Maria Maio-Messano, director of the HUD Newark field office, said no similar program exists in any other New Jersey city that involves a housing authority. “This is really a model for other housing authorities to look at. Paterson is becoming a model for actually working to create small businesses.”

Paterson’s number could increase in the coming years as more and more people go through the program which is a collaboration between the Passaic County Community College, Paterson’s Small Business Development Center, and the Greater Newark Enterprise Corporation.

Mitchell Greene, a small business consultant, who teaches at the Rutger’s Business School, said many of those who went through the program have a drive to succeed. “They have the intuition. They just need help with what to do and how.”

Michael Dixon, who went through the program, said the program reduced some of his fears, as he learned the process to start a legitimate business.

“It helped me organize and not make any mistakes financially,” said Dixon, who started a tattoo business that morphed into a paint shop. He worked at the Heritage at the Alexander Hamilton as a construction worker, but was out of a job when a phase of that project concluded.

Dixon used the time to register for the program paying a $100 fee.

“It was tough,” he described the classes he attended. He said it was worth it as he left the program having learned about business accounting, taxes, and planning.

The students of the program learn about the realities of entrepreneurship, credit building, branding, insurance, human resource, certifying business for procurement, and a host of other related topics.

Dixon has an office for his paint shop at the second floor of the Ward Street building. The second floor contains 12 officers, a conference room, two lounges, and a break room.

There are also mentors at the location to assist the businesses in becoming successful homegrown enterprises.

Half of the offices have been rented out to graduates of the program.

For more information about the program visit the Paterson Housing Authority website.