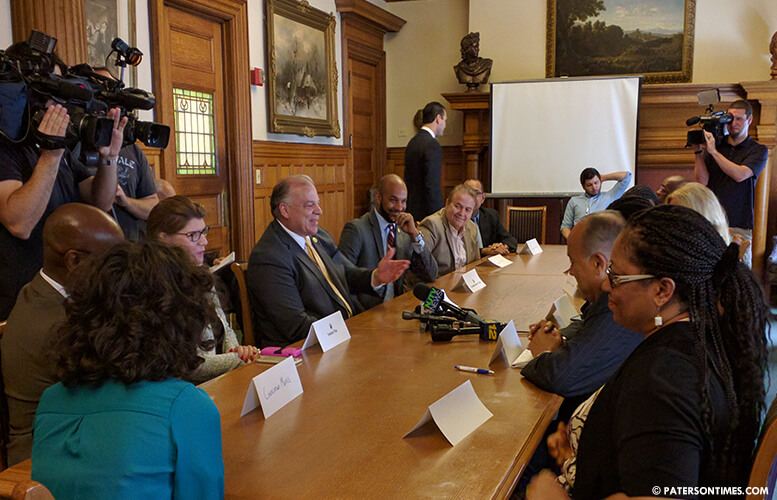 The city’s school district would lose $238.96 million under governor Chris Christie’s proposed school funding proposal which seeks to give $6,599 per student to each school system, according to the Paterson Education Fund, an advocacy.

Rosie Grant, executive director of the Paterson Education Fund, said that amounts to a 59-percent reduction in funding for the district. She said that would eliminate programs that have helped the district increase its graduation rate to close to 80-percent last school year.

“At least half of our schools will close,” said Grant at the education funding roundtable organized by senate president Steve Sweeney and senator Nellie Pou at the Hamilton Club on Church Street.

Christie has said his proposal treats every child in New Jersey “equally.” The proposal would increase funding for 75-percent of school districts in the state and provide property tax relief to homeowners in those towns.

School board president Christopher Irving said the governor’s proposal is “inherently biased” against urban school districts like Paterson which are populated by Blacks and Hispanics.

“Not everything that’s fair or equal is equitable,” said Irving. “This town needs a plan that infuses funding back to the school district.” He said the district has laid off more than 400 teachers and staff members yet it will face another large deficit next year.

Sweeney touted his school funding plan which will place all school districts at 100-percent funding.

“Get everyone at the end of five years at 100-percent of funding. It’s never enough, but if everyone is at hundred, it’s not us against them. It’s not people pointing fingers at each other,” said Sweeney.

Sweeney wants legislators to hammer out a plan to correct disparities in education aid school districts receive under the 2008 School Funding Reform Act (SFRA) formula. The disparities resulted from the state’s failure to follow the formula and lawmakers’ moves to protect their local school districts, he said.

The plan would go before the senate for an up or down vote without alteration to the measure. The senate president’s proposal would provide the city’s school district with an additional $36 million in education funding, said Pou.

“It would help communities like Paterson and give children in our city the hope of getting an education that will prepare them for today’s economy,” said Pou of the senate president’s plan.

Clayton, who also serves as the president of the Paterson chapter of the National Association for the Advancement of Colored People (NAACP), denounced the governor’s proposal as “racist” and intended to hurt minority communities in New Jersey.

The district cannot afford to lose so much of its funding after making incremental improvements over the years in instruction through its high school academies and gifted and talented program, said Best, who also works as an administrator at the district.

Children in Paterson have needs that result from poverty, broken homes, language barrier that require funding to overcome, said some at the roundtable.

“This is a district that’s succeeding under difficult circumstances, but it won’t be able to do it for much longer,” said Sweeney.