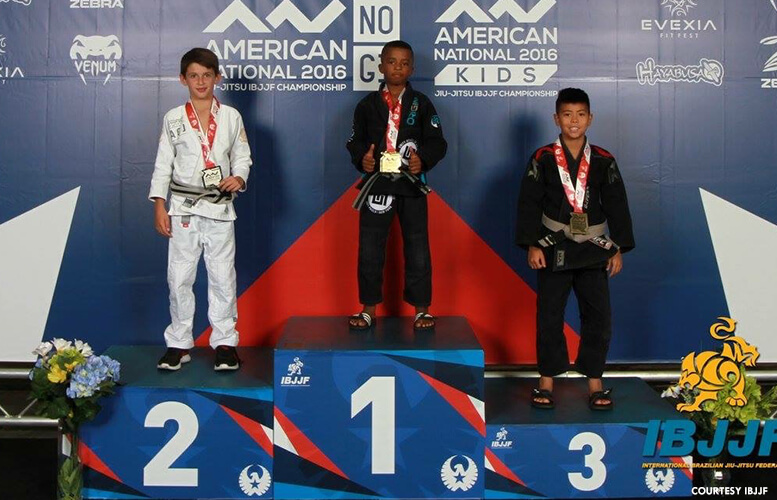 “Jalen beat the kid he lost to controversially in the world championship. He beat him pretty conclusively too,” said Naji Mitchell, father of the two jiu-jitsu champions, who previously brought home gold and silver medals from the Pan Kids Jiu-Jitsu Championship back in February.

“I’m extremely proud of them. They’ve been training consistently. They’ve been gearing towards higher level of competition,” said Mitchell. Their trainer at the Unity School of Jiu Jitsu – New Jersey in Totowa is also looking to compete at a higher level.

When asked when his teacher plans on pushing him up to brown belt level, Johnson said, “It’s common etiquette not to ask.”

It generally takes year and half to climb up a belt, he noted. He said he also wants to run a jiu-jitsu school as well as have a strong program to recruit inner city young people.

“I really think a lot of the problems we have with inner city kids is that they don’t have anywhere to go or release frustration,” said Johnson, who lives on Godwin Avenue. “I know what these kids are feeling. There’s nothing good on the streets. A lot of that negative energy has to be channeled to somewhere to make them positive people.”

Johnson, who attends Ramapo College when he isn’t beating up opponents, has witnessed the change that occurred in the small number of students who train at the school. “Taking them to see Vegas and Cali completely morphed their personality. You wouldn’t recognize them if I showed a video when they first came and three months later — the change is magnificent,” he said.

He said he wants to begin an after school or summer program to train and recruit inner city youngsters into jiu-jitsu.

4 of his students won gold and 2 won bronze at the Las Vegas competition, he said.

Mitchell said his boys were able to take part in the competition thanks to contributions from assemblyman and beloved coach Benjie Wimberly, councilman Andre Sayegh, and the Great Falls Rotary Club.

Sayegh recognized the two boys and their parents earlier in the year with citations. He represents the neighborhood in the 6th Ward where the family resides.