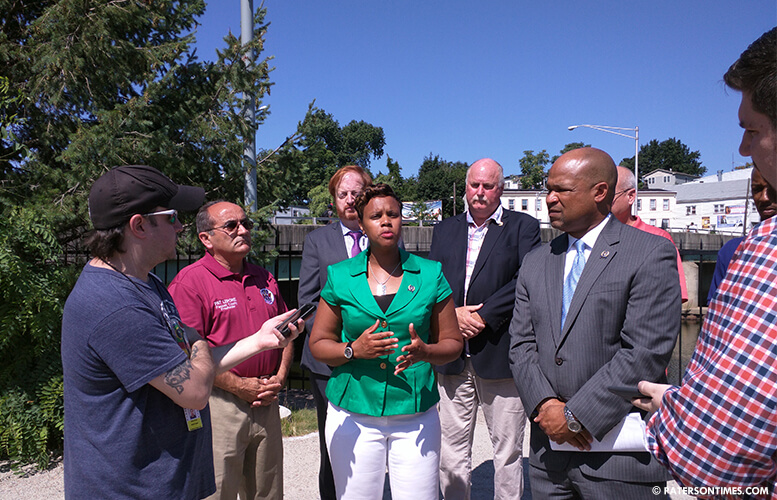 The battle between New Jersey governor Chris Christie and the state senate over how to fund the Transportation Trust Fund has halted more than $20 million in much needed road and bridge work managed by the Passaic County government, said officials on Tuesday morning.

Work on the 102-year-old 8th Avenue Bridge connecting Passaic City and Wallington, deck replacement of the Wayne Avenue bridge in Paterson, and several other projects have been halted.

In all 11 county managed road and bridge projects have been halted, said officials.

“We urge the governor and legislature to work together to resolve this impasse to get these projects up and running again,” said deputy freeholder director John Bartlett, speaking steps away from the Wayne Avenue bridge. “Here in Passaic County more than $20 million in county managed projects have been halted by the governor’s action.”

Bartlett said five roads have been milled, but due to the governor’s executive order have not been surfaced.

Assembly members Benjie Wimberly and Shavonda Sumter also urged the governor and senate president Steve Sweeney to end the impasse. The assembly passed a bill raising the gas tax while cutting the sales tax. Sweeney proposed his own bill that raises the gas tax and has other tax cuts.

“This bridge will not have the resurfacing that is sorely needed,” said Sumter, pointing to the Wayne Avenue bridge over the Passaic River. She said the crumbling bridges and roads present a safety problem for residents. “We’re not talking about issues non-threatening to the public. We took an oath to protect and serve,” she said.

“We do not want to come here after a tragedy,” added Wimberly.  He said several projects – the Market Street bus garage rehabilitation, the Broadway bus terminal rehab, and city’s annual road resurfacing – all have been completely frozen.

“Our bridges are deteriorating,” said city councilman Luis Velez. “It’s a liability for our city. Why wait until something happens?”

The governor and the senate will have to make something happen before the road and bridge projects can resume.