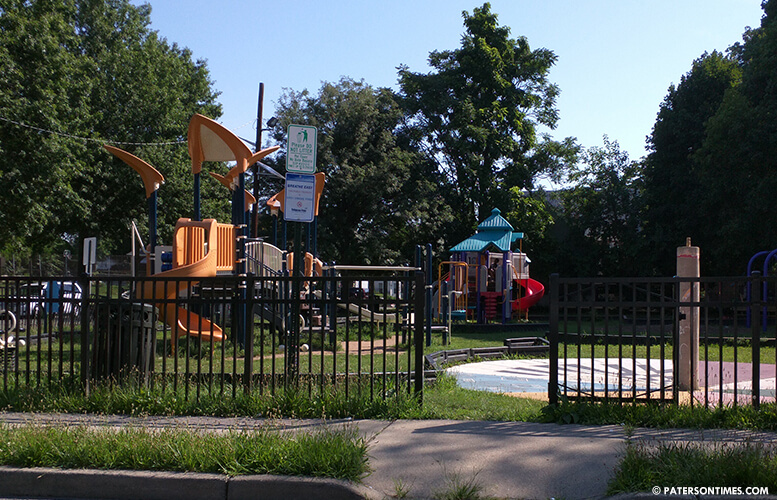 The playground in the corner of Oxford and North 8th Streets – known as the Ralph DiMarcantonio Playground — is expected to receive a $41,000 makeover from the Paterson Veterans Council.

Named after World War II veteran and former 1st Ward councilman Ralph DiMarcantonio, the playground suffers from neglect. It is in disrepair with a damaged fence, overgrown trees and weed, and fading signs.

Three dead trees will be cut down, new benches will be installed, new pavers will be setup, and the entire park will be resod, said Tony Vancheri, president of the Paterson Veterans Council. He said the black fence, which was damaged when a vehicle crashed into it, will be replaced by the city once work begins on the playground.

Last year, the city government budgeted $1.6 million for the upkeep of municipal parks, according to the fiscal year 2016 budget. However, that appears not to be enough to take care of all the parks in the city.

Vancheri said the council received initial approval for approximately $57,000 in grant money – majority of it for the DiMarcantonio Park — from the committee that oversees the Passaic County Open Space and Farmland Preservation Trust Fund.

Vancheri said the Passaic County Board of Chosen Freeholders will vote on the committee’s recommendations in mid-August. He hopes to obtain the county’s final approval at that point to begin work on the park.

He expects to finish the work at the end of September.

Tanis, who continues to reside in the Silk City, served as the catalyst to revitalize the park, said Vancheri.

“This is about serving her father, who was a United States Marine during World War II, that’s why we’re honoring him,” said Vancheri.

DiMarcantonio, who represented the 1st Ward in the mid-1970s to early 1980s, died while in office. His wife, Irene DiMarcantonio, succeeded him. She died in 2010.