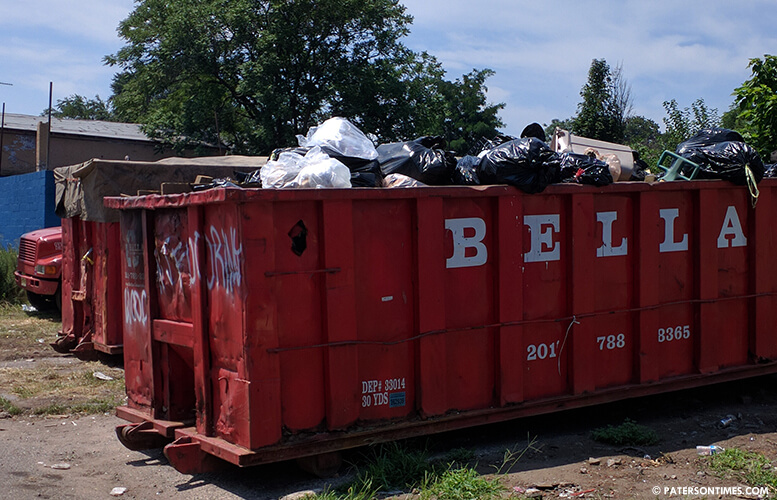 Raabe’s company has been cited and criticized for illegally operating in the municipality over the past year. Most recently, the company has been cited for leaving dumpsters on a vacant lot at 28 Summer Street creating a stench and quality of life problems for senior citizens living at the Nathan Barnert Apartments complex.

The owner has been difficult to track down. The prosecutor at the municipal court earlier in the month stated Raabe seldom shows up when summoned to court. His company’s action earned him rebuke from council members exactly one-year ago.

Council members at the time said Raabe was operating his garbage company at the dead end of Warren Street without the requisite permits or city approvals. The company appears to have moved out of the dead end where there was no activity on Friday afternoon.

However, a number of garbage containers remain at 28 Summer Street, where the heat wave has unleashed a foul stench of rotting garbage earning the attention of the Passaic County Health Department.

Passaic County officials began investigating this week and will potentially cite the company for leaving garbage in the dumpsters for more than 24 hours and other violations. Ellen Heines, who owns the vacant lot where the dumpsters are situated, may also receive citations, said officials.

Heines said she allows the company’s workers to leave the trucks and dumpsters at the location. She said she does not charge any rent from the company. She does not see any issue with the stench or the garbage – tires, carpets, a broken television, and other junk — that has accumulated in her lot.

She has lodged a lawsuit against the city over the situation, she and officials said. Officials said the New Jersey Department of Environmental Protection (NJDEP) is also looking into the company which has been a headache for city residents and officials.