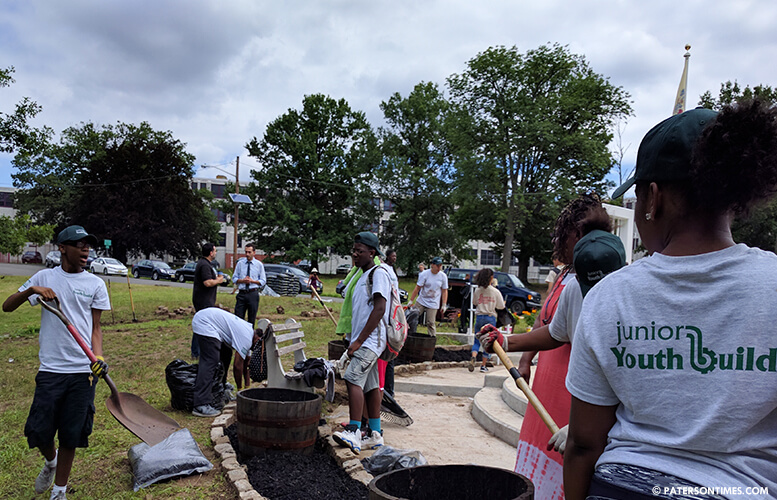 Seven Fowler gathered discarded plastic bottles and cups using a rake on the side of the stairs leading down from the new Shohid Minar monument in Westside Park while his two new friends – Tamaya Everett and Ra’nayah Alston — held open garbage bags.

Fowler, Everett, and Alston were handling the duties of their first real jobs. They were among the 40 young people employed by the New Jersey Community Development Corporation (NJCDC)’s new Junior YouthBuild program funded by a $100,000 federal Community Development Block Grant (CDBG) grant issued by the city.

Alston has been working since July 5th, 2016. She earns $8.50 per hour through the program. She was one of the lucky ones. 200 young people applied to the new summer jobs program, but only 40 of them were accepted, said Seth Friedman, vice-president of development at NJCDC.

“We’ve been able to accommodate only one fourth of the applicants. The need for summer jobs is enormous in Paterson,” said Bob Guarasci, president of NJCDC. He said he expects the program to offer summer jobs to city youngsters every year.

“All of this is to make sure they are prepared for a job once they graduate high school or college,” said Friedman. He said the students learn resume writing and interviewing skills as part of the program.

Their summer job also gets added to their resume, he said. The students, all city residents, work 30 hours a week. They will work for six-weeks. Friedman said the young people are provided a paycheck rather than a stipend which allows them to see the various deductions in their paycheck.

“It’s important to let the kids see how much money they get from a paycheck,” said Friedman. He said the young people learn leadership, time management, and conflict resolution skills during the course of their employment.

“It teaches responsibility,” said Everett, 15, who attends John F. Kennedy High School. She said she has made a lot of friends through the program while learning good work ethics.

“I’ve not been late, not one time,” added Fowler, 17. When asked what made him sign up for the program, Fowler said he did not have anything planned for the summer and saw it as an opportunity to make a few dollars.

“For the pay,” said Mohammed Hossain, 20, who graduated from John F. Kennedy High School, when asked about his reason for joining. Hossain and his friend Anwar Hussain, 18, said the work was meaningful to them as they cleaned up a monument revered in their native Bangladesh.

“I’m proud of it. A lot of people come here. I like to see it clean,” said Anwar. He noted that a large number of people from the city’s Bangladesh-American community visit the monument on February 21 – known as Mother Language Day – to remember those who perished to preserve the Bangla language.

Hussain said his friends and relatives visiting from the South Asian nation visit the park to see the monument. Hossain and Hussain said they cleaned up garbage and picked up weeds from around the monument.

Guarasci said the Westside Park has been neglected for far too long. “Westside Park is one of the city’s crown jewels that has fallen on disrepair and hard times.”

Youngsters did not just clean up the park, but also handled the landscaping around the monument.

“We feel an obligation to ensure the area is properly maintained,” said Guarasci pointing to the monument his organization and the local Bangladeshi community erected with funding from the Passaic County government. He said NJCDC is working to assemble a permanent team to maintain the area.