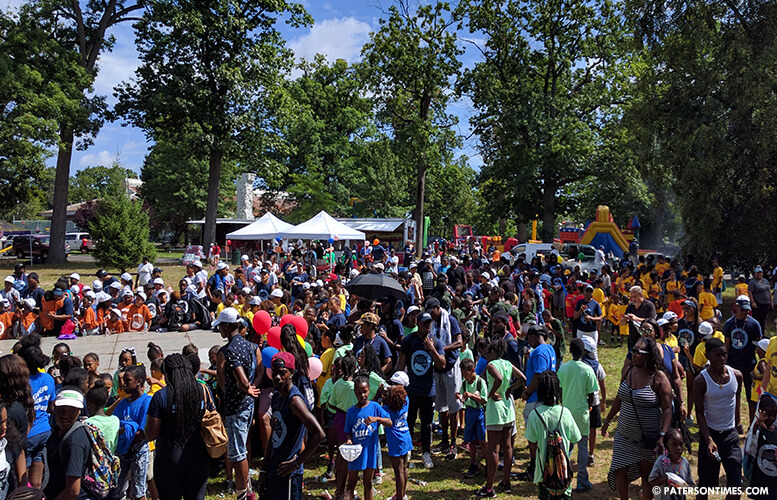 More than a thousand young people enjoyed the city’s annual “Day in the Sun” event at Eastside Park on Thursday putting on performances that each group worked hard to prepare over the summer.

Leyla Williams created a ship as part of a three-week program called “Princess to Queens” using arts and crafts. Williams was in a group of 30 girls who spent three-weeks creating a ship called “Cruising into Summer” and were eager to get on the stage to present.

“It was really fun,” said Williams, 8, of Norman S. Weir School, of the work she and others have done through the summer. “We put a lot of glitter on it.” The girls created the ship wheel, windows of the lower deck, and other distinct parts of a large ship.

“It was the highlight of their summer,” said Atiyya Barrett, director of the program. The girls, between the ages of 7 and 12, also learned etiquette, experienced career day, and held a formal tea party.

In between the girls and their director attended city council meetings and wrote letters to mayor Jose “Joey” Torres to implore him to reinstate the “Day in the Sun” event. That never happened. However, through the help of private donors, recreation coordinator Benjie Wimberly managed to hold Thursday’s event which featured, rides, clowns, and grilled food.

Wimberly credited the donors for saving the event for the city’s children. Thanking developer Charles Florio for his $18,000 donation, an anonymous donor for a $7,000 contribution, and other small time donors.

“We had donations as small as $20. The sentiment was they wanted kids to have this event,” said Wimberly of the donors. “This is the best one we’ve had.” Wimberly, who also represents Paterson in the New Jersey Assembly, said by Monday $26,000 was raised to make the event attended by approximately 1,800 children happen.

“All children deserve a day in the sun. We got the job done,” said Andre Sayegh, 6th Ward councilman, who donated $1,000 to save the event.

“Look at the smiles on the kids’ faces. This is what community engagement is about,” said Christopher Irving, school board president. He said it was “shortsighted” on the mayor’s part to cancel the annual happening.

Torres also ordered the shutdown of recreation programs two weeks early. “It’s going to hurt us a little bit,” said Cornelius Kinchen, 18, when asked about the two weeks of pay he won’t be receiving.

“I was mad,” said Amorei Cooke, 14, of Eastside High School, recalling the day she found out the event was going to be cancelled. “I thought we worked so hard for nothing. We were so excited to perform.”

Cooke practice hip-hop dances to perform before the crowd at the event.

“When we found out it was going to go on they were excited,” said Barrett. She said she may volunteer to keep the “Princess to Queens” camp open for an extra two weeks.

Wayne Smith, a retired city police officer, whose daughter is enrolled into one of the summer camps, said events like the “Day in the Sun” allow youngsters to see there are people who care for them. “It let’s them know we care. We want to end the summer with a bang,” said Smith.

The mayor is on vacation in the Dominican Republic having his own day in the sun.

Correction (Aug. 11, 2016): A previous version of this report erroneously stated the event was called “Fun in the Sun” when in fact it is called “Day in the Sun.”