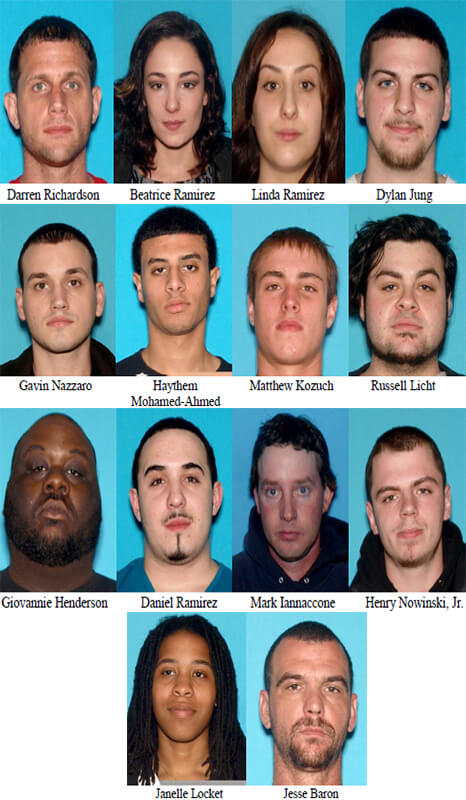 A multi-county marijuana distribution operation was dismantled on Sunday with the arrest of 14 people in early morning raids and seizure of 10 pounds of marijuana, $267,000 in cash, according to the Passaic County Prosecutor’s Office.

Darren Richardson, 33, of Haskell, is identified as the ring leader of the drug trafficking network that obtained marijuana from California and packaged them in Morris Plains for distribution to individuals and residential homes in Passaic, Bergen, Morris, and Sussex counties, authorities said.

Authorities seized 10 pounds of marijuana, 9.5 pounds and 14 folds of wax containing THC at the conclusion of the four-month investigation on Sunday. 1,000 grams of candy laced with THC was also seized. THC is the main chemical found in marijuana.

Police also raided a hotel in Morris County where two of the suspects were staying, authorities said.

Ramirez allegedly worked with the ring leader with handling the finances of criminal activity, authorities said. Henderson is charged with maintaining and operating a drug production facility in Morris Plains.

Authorities charged the rest of the individuals on operating a drug production facility and marijuana possession. Additional charges are pending against the individuals.

Richardson and Ramirez allegedly mailed large amounts of money to California. Richardson would travel there to arrange for marijuana shipments to New Jersey. Packages would arrive in New Jersey and be taken by both to 920 Tabor Road in Morris Plains for distributions to individuals and residential homes in Passaic, Bergen, Morris, and Sussex counties.