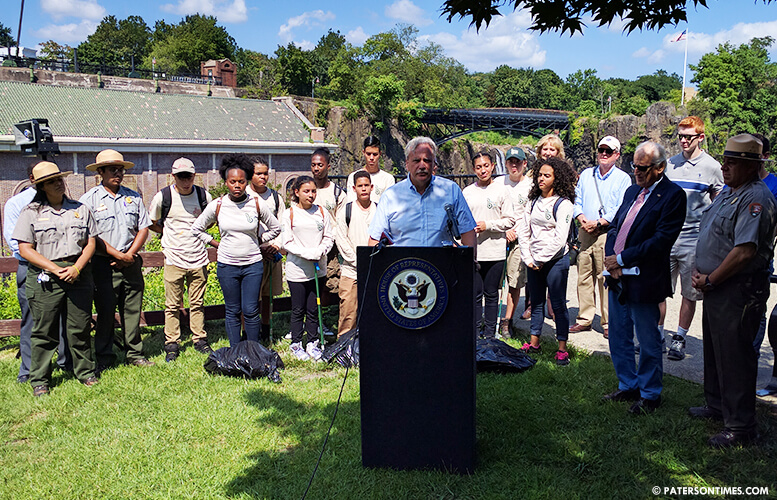 The city’s native son congressman Bill Pascrell and the head of New Jersey’s largest environmental group Jeff Tittel celebrated the 100th anniversary of the National Park Service at the Great Falls with more than a dozen local high schoolers working to keep the 35-acre park clean on Friday morning.

“This park not only represents the last 100 years, but the next 100 years,” said Jeff Tittel, head of the New Jersey Sierra Club, speaking about the Great Falls Historical National Park. “You’ve got historic and cultural resources in this city like no other place. There’s nothing like it in the world.”

Tittel traced the revolutionary idea of the national parks to the Sierra Club’s founder John Muir. The legendary conservationist is referred to as the Father of the National Parks. He played an instrumental role in preserving the American wilderness.

“I wanted to preserve the Great Falls by bringing it into the National Park Service. And we did the right thing. It’s because of the Park Service we’re able to stand here today to enjoy both beauty and history,” said Pascrell standing flanked by a dozen volunteers from the Great Falls Youth Corps at Overlook Park.

Pascrell said the Great Falls is the only park in the system that brings together natural beauty and history. The United States started out with 35 national parks when Woodrow Wilson signed the legislation creating the National Park Service. Today, the park service has 412 units, according to the federal government.

The Great Falls Historical National Park became the 397th unit in 2011. The federal government this year completed a 20-year plan for the park.

16-year-old Moises Segarra said he took part in the formulation of the general management plan for the park. “I’m hoping for more of a recreational area,” he said. He said he hopes one day, he could go kayaking in the Passaic River.

“You can right now, you just can’t get water on you,” interposed Tittel. He said the issue is mucky water that’s in the Passaic River that would present a problem for Segarra.

Segarra, who is a junior at the Garret Morgan Academy, said he has been volunteering for the Great Falls Youth Corps since last summer. He returned this summer to do his part in keeping the urban oasis clean.

He said the youth group opened up his eyes to the glorious history of Paterson. “Before I was in this program I didn’t know.” He said he is looking forward to next week when the National Park Service will put on a bioblitz in the vicinity of the park.

“For many years this whole area was in danger,” said Bob Guarasci, president of the New Jersey Community Development Corporation (NJCDC), which sponsors the youth corps. He credited Pascrell, former senator Frank Lautenberg, and others for preserving the natural wonder. “We must work as hard as we can to let the future generations know Paterson’s Great Falls played an important part in American history.”

“The concept of a National park is a uniquely American idea that has spread around the world. It is the concept that land is belongs to the people and held in the public trust, not for kings. We are proud that Sierra Club’s founder John Muir had educated Teddy Roosevelt on the need to establish a national park system,” said Tittel speaking about the three-day wilderness trip Muir and Roosevelt went on in Yosemite in 1903. “Sierra Club is honored to be the main environmental organization in 2016 to take the vision of Muir and Roosevelt and to make it the law of the land for 100 years. The Sierra Club feels special about this celebration because it’s part of our legacy.”

Roosevelt visited Paterson in 1899 to attend the funeral of vice president Garret Hobart. He also replaced Hobart on the 1900 Republican Party presidential ticket.