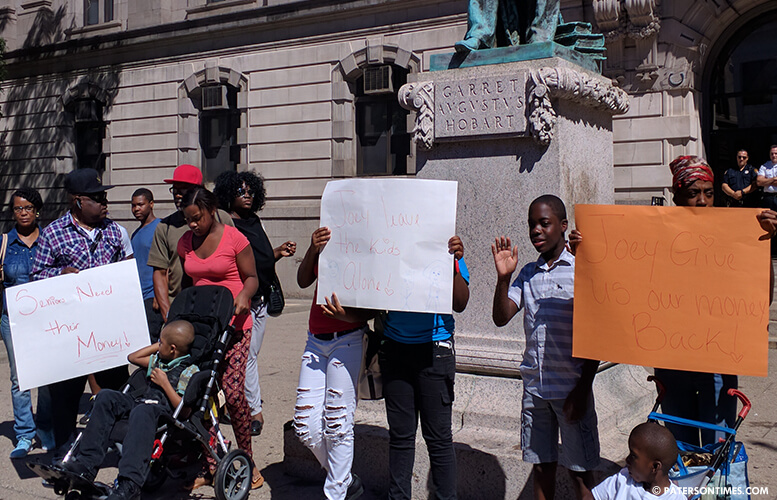 A planned protest against embattled mayor Jose “Joey” Torres over cuts to recreation programs and his use of public works employees for private projects attracted a dozen people to City Hall on Tuesday afternoon.

“Since you took our money, take our kids too,” said Lynda Gallashaw, who organized the protest through a new outfit called the Agents of Change. Organizers hoped to turn the City Hall building into a camp site, but a contingent of them attempted to enter the historic building only to find they were blocked by police officers.

Protesters led by Gallashaw circumambulated the statue of Garret Hobart in front of the historic City Hall building while chanting for the city to restore funding to recreation programs.

The protest was to have been the work of 33 different groups from the city, but the turnout was disappointing for the organizers. An hour after the event was to occur only a small number of people showed up. In fact, there were more news cameras and reporters present than protesters.

“We don’t never do things on time,” said activist Kevin Womble about the slow start.

“This will grow into many,” said Gallashaw of the scarcely attended protest. The mayor’s supporters saw the protest little more than a laughable spectacle.

The organizers acknowledged staging a protest on a Tuesday morning in a working class city may not have been the best move. Those who did make it to the protest had harsh words for the mayor.

“By cutting these programs you put additional burden on a family,” said Frank McKinney of the Freedom Village Tenants Association. He said the cuts to recreation program only worsens the plight of struggling single mothers.

McKinney said seniors who have to take care of grandchildren are particularly hit by the cuts. He represents about 40 seniors who live at the building on Straight Street. He blamed the mayor, but also the city council for the recreation cuts.

“The mayor always points a gun at the community,” said McKinney, 67. “It’s the city council that pulls the trigger.” He said the council approved the mayor’s tax levy only after he threatened to lay off more than 250 municipal employees.

Protesters held up signs urging the mayor to restore funding for recreation programs. A number of them also called for the mayor’s removal from office. Some mentioned a recall to oust the mayor.

Torres has been dogged by a scandal involving public works employees who handled private project for the mayor while allegedly billing taxpayers. Those allegations have forced several city activist to call for a no confidence vote from the city council on the mayor.

The council is expected to consider a no confidence vote on Torres in its September 13th, 2016 meeting.