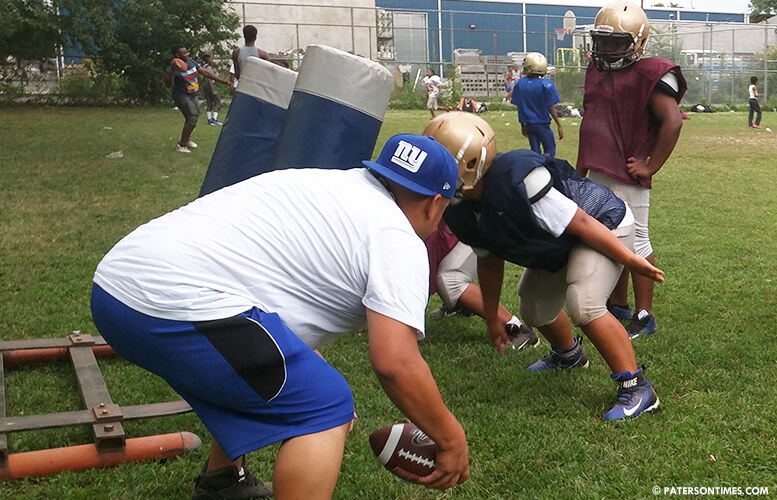 Dozens of youngsters practiced tackle, throw, and other football maneuvers at the field behind School 20 on Wednesday afternoon as their coach, Anthony Carter, explained why he had to reject 60 youngsters from the Nifty Lions’ football program.

“We had to turn kids away because we didn’t have equipment,” said Carter. He is talking about safety equipment like football helmet to protect youngsters from injuries. He learned about a grant opportunity available through the SportsNet New York (SNY)’s Play Ball program from former 4th Ward city council candidate and planning board member Mark Fischer.

Carter submitted an application that highlighted the needs of the Nifty Lions Sports Organization and secured the grant.

Marie DeParis, senior vice president, marketing and business development at SNY, said the regional sports network’s Play Ball campaign looked at the league’s need and selected it from a pool of more than 100 applications to receive a $5,000 grant to purchase helmets for young people.

“We try to keep them busy,” added Winnie Harrison, vice president of the Nifty Lions Sports Organization, explaining Nifty stands for Necessary Improvements for Today’s Youth. She said the youth league has been around since 1997. It was dormant for a period until it was revived in 2010, she said.

Part of the program also includes making sure the youngsters enrolled keep up a certain grade point average or risk being booted out of the program, said Harrison.

The program is free except for a $125 registration fee. Harrison said the organization brings in money through fundraisers to keep the program afloat.

“We appreciate the grant,” she said. DeParis said the grants, besides providing the equipment, also do much to urge local communities to sport their youth teams.

“We hope to inspire others to support their local teams,” said DeParis.

Odell Lashley, whose nine-year-old son Jahzier is enrolled into the football program, said he supports the teams.

“It’s real good for the kids,” he said of the grant. Lashley said the program provides a safe haven for children. His daughter 10-year-old Kaderyiana is enrolled into the organization’s cheerleading program, he said.

“There’s too much violence in Paterson right now. It’s going to keep the youth out of trouble,” said Lashley.

The young people kept out of trouble do well in sports competitions. Last year, the Nifty Lions made it to the East Coast Youth Football League tournament in Virginia.